The past, present and future of PH's premier videogame convention

2018 has been a rather tiring one for the video game industry. Between developers releasing games that severely under-deliver or being tone-deaf, gaming companies accused of perpetuating sexual harassment and toxic work cultures, video game journalists plagiarizing content, problematic professional gamers and content creators, and a whole lot more – there doesn't seem to be a shortage of sad or disappointing news in the gaming industry this year.

Thankfully, the local industry is lucky enough to be able to rely on an event that hasn't failed in delivering and cultivating a positive outlook for anything and everything about games in general – the Esports and Gaming Summit (ESGS).

The last ESGS concluded this October but announcements have already been made about its 5th edition happening next year.

For the past 4 years, ESGS has been the country's go-to event for gamers of all backgrounds.  Touted as "one of Southeast Asia's biggest gaming conventions," the last edition garnered around 24,000 plus attendees. This is according to the Facebook post of Joebert Yu, the founder of the event and the company behind it, Gariath Concepts.

With its continuous years of success, some have already concluded this as "the E3 of the Philippines." In terms of format, and numbers, I wouldn't say this is the case. But in terms of it being an event that caters to multiple demographics of gamers, it is.

And ESGS has done more than just bring gamers of all types in one venue. It's brought the community closer to their favorite brands. It's become a platform for indie developers to promote their creations, and for students to garner feedback for their work. It's become a space for artists to sell their pieces too.

More than anything it's helped the community and the local industry grow and be heard. And it's helped put the Philippine market on the map.

To get into the nitty-gritty of it and to discuss how its founders feel about the growth of their event, we sat down with ESGS co-founder and head of communications at Gariath Concepts, Chad Ramos. Here he discusses the past, the present, and the future of ESGS.

The past: Starting strong

Interestingly enough, the 1st ESGS was in some way or another, supposed to be the last ESGS. Chad described the event to be their team's "swan song" after their former company closed down. The event was a labor of passion as the small group shelled out their own money to make the first ESGS possible.

It was a success.

The 1st ESGS was held at the SMX convention center back in 2014. It didn't take up the entire 1st floor like this year's did, but even then, it garnered more than the expected number of attendees. Chad revealed that they only expected 5,000 attendees but the first ESGS drew in 7,000. And so ideas for the 2nd ESGS started forming.

The 2nd ESGS was held at the second floor of the SMX convention center. It had mostly the same format as the 1st ESGS but this time there were more content creators and companies joining in.

However there was one company present that was seen as a sign for exciting things ahead for the industry. It just so happened at the time that a huge international developer and publisher was looking into the Philippines' talent pool: Ubisoft. They were in town to recruit artists and developers. 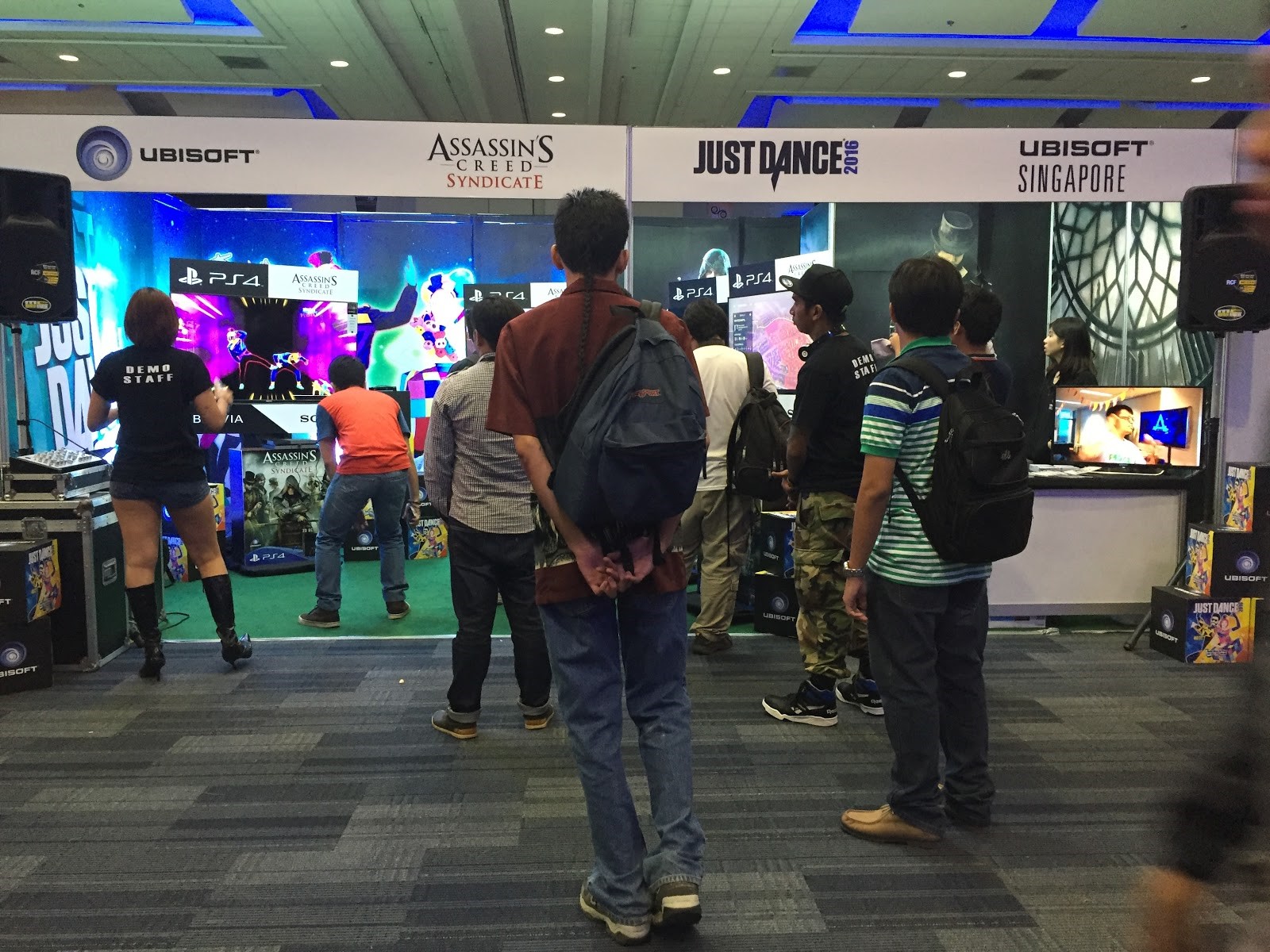 Ubisoft was one of the first big names to attend the ESGS. Now they have a studio in the Philippines. Photo by Nadine Pacis/GameProgression.

Sylviane Bahr, Communications Manager for Ubisoft Singapore, mentioned at the time that while they didn't have plans to set up a studio in the Philippines, they were interested in hiring Filipinos for their artistic talents and their command of the English language.

“For us, what is very important is our culture. I believe that for Filipinos, it will be really easy for them to understand the corporate culture of Ubisoft. The level of English here is amazing, which makes it very attractive for an international company like Ubisoft to hire,” Bahr said about their move back then.

So they set up a booth at ESGS. It was small compared to their future setups at ESGS, but it was enough to build something bigger in the end.

What followed during the 3rd year of ESGS was probably what cemented the event as a must-attend for Filipino gamers. On ESGS 2016, other triple-A studios Sony, Bandai Namco, Capcom, and Ubisoft were present with their biggest titles for the year. Not only that, but Castlevania's Koji Igarashi also arrived.

It was a chance for the international developers to get to know the passion of the Philippine market. It was an opportunity for Philippine fans – many for the first time – to connect with their favorite brands and developers. Gamers who grew up in the '90s saw all these huge brands coming up with big titles for the era's consoles, and it had been amazing to be finally be this close to them, to finally see them exist outside of gaming magazines and websites. 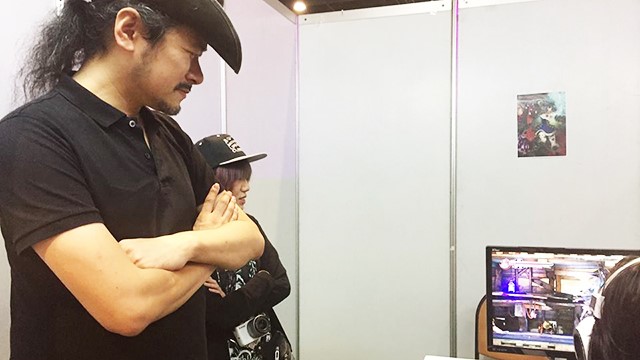 Revered developer, Koji Igarashi, was surprised at the number of people who lined up at his booth to try out his new game. Photo by Nadine Pacis/GameProgression.

The developers themselves were surprised. "When we create games, we always market them towards North America, Europe, and Japan. Upon coming here, we had no idea how many Filipino fans there were. And after coming here we found out that there were so many, so many fans here and so we were surprised and we didn’t expect that there were this much fans here," Igarashi said about the warm reception. He also mentioned that he was surprised about the diversity of Filipino fans. He said he didn't expect even women gamers to approach his booth.

Chad described ESGS 2016 as "the beginning of great things," and he highlighted it as "one of my favorite moments." 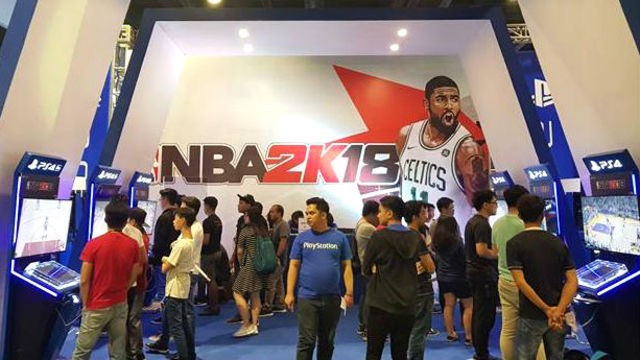 Big gaming names such as Sony Playstation returned to ESGS in 2017. Photo by Nadine Pacis/GameProgression.

Indeed, it was the beginning of great things ahead. The 4 huge companies made their return the next year with more of their new content. But local groups and companies were also making a bigger splash. By this time, they were providing more content. Synergy88 introduced Barangay 143, which then on became a fully fledged anime with its own mobile game. Secret6's Project Xandata was also gaining more traction with an improved version of the game. Ranida's Bayani: Kanino ka kakampi? also was a hit for attendees.

Local gamers expressed their joy and excitement for fresh and polished local content, some clamoring for more.

With Gariath Concepts successfully establishing ESGS as a staple convention for local gamers, Chad and his team had the foresight to make sure that attendees never get tired of their content.

"The biggest challenge here is making unique content for each year, to make it more refreshing for each attendee. Because the number one problem with every convention is that it becomes redundant," Chad explained.

So, things were different for ESGS 2018.

This year, ESGS spanned the entire first floor of the SMX convention center. Gariath Concepts also rented an additional function hall on the second floor for members of the media to conduct their interviews. And finally, additional meeting rooms were booked for different activities for specific brands.

And instead of an intense focus for huge titles, ESGS 2018 focused on hardware, VR, and eSports. Though these have always been present during previous ESGS, the spotlight didn't always shine on them.

The biggest booths were dedicated to big hardware names with displays of machines that every gamer wants to have for their own setup. Custom rigs also had more prominence. The MSI booth felt like a museum with wild creations from passionate PC gamers. Predator had a behemoth 2-floor booth showcasing their VR hardware and merchandise. Meanwhile, tournaments spread out through the convention floor – fighting games, PUBG, Dota 2, Mobile Legends, VainGlory, and more. Even Xandata, which had gone on to participate at other conventions, had its own tournament.

Truly, there is growth in diversity.

The future: A mystery celebration

The cover photo for Facebook's ESGS has already changed. A new hashtag has also been revealed: #fivetimesthehype. Already, Gariath Concepts is starting up the hype machine and they plan to make it bigger than ever before. After all, they're celebrating 5 years of ESGS.

But that being said, Chad was candid about their early plans for the fifth year of ESGS' existence. "It's hard to say for next year because we're still currently planning for what we can do. But what we can say that for next year, we're celebrating 5 years of ESGS and we're going to make sure that it'll be a worthwhile event for everyone."

And at the rate that they're going, I believe that if anyone can pull off an especially huge event for the Philippine gaming industry, it would be Chad and his team at Gariath Concepts. – Rappler.com

Nadine Pacis is the main writer for gameprogression.com, a site that covers perspectives and experiences in video games and the industries surrounding it.