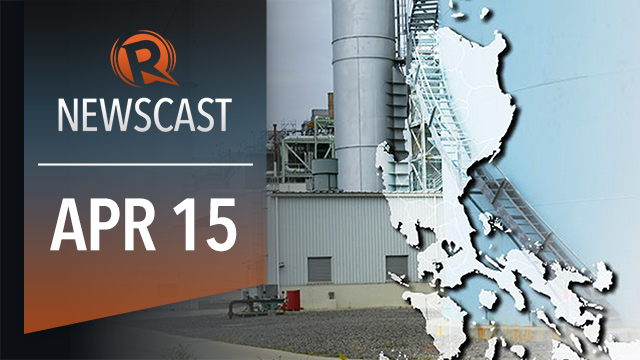 The National Grid Corporation of the Philippines says power supply in the Luzon grid will be tight until Wednesday because of a glitch in a power plant.
Luzon was placed under yellow alert starting Tuesday.
This means there is a "thin" power reserve -- less than 600 megawatts.
Energy Secretary Jericho Petilla confirms the emergency shutdown of the
Masinloc power plant, but says there is no cause for panic.
Power supply is usually tight during summer months as demand for electricity is higher than supply.
Many power plants are also scheduled for maintenance and repairs during this time.

Leftist lawmakers ask the Supreme Court to extend its temporary restraining order or TRO on the rate hike of power distributor Manila Electric Company or Meralco.
In a motion filed Tuesday, legislators from the Makabayan coalition say that if the TRO is not extended, it will cause "grave and irreparable injury."
Petitioners say Meralco unnecessarily inflated the charges passed on to consumers.
In February, the High Court extended its initial TRO on the rate increase.
It expires April 22.
Meralco's 4-peso and 15-centavo per kilowatt-hour rate hike is the highest ever to be imposed by the power company.
The company says the rate hike is because of simultaneous shutdowns of power plants which supply its energy.
The outages forced Meralco to buy power from the Wholesale Electricity Spot Market or WESM.
Meralco says it was a victim of arbitrary bids that messed up pricing at WESM.
It also says the TRO puts the power company at risk, and warns about the possibility of rotational black-outs.
The High Court is set to decide if the rate increase and the approval of the Energy Regulatory Commission is constitutional.

A broken rail along the southbound route of the Metro Rail Transit Line 3 stalls operations Tuesday.
MRT general manager Al Vitangcol says the MRT 3 rail was not operational from the southbound route of both North Avenue and Quezon Avenue stations.
Full operations resumed at 11:55 am.
Periodic shutdown in operations and long lines during rush hour remain problems.
The MRT expects to get additional coaches in the first quarter of 2015.
These persistent problems pushed commuter groups to call for Vitangcol to resign.

The siege in Zamboanga City last year destroyed homes, disrupted livelihood, and forced children out of school.
But 3 schools most affected by the fighting managed to get a high percentage of its students to go back to school and to graduate.
Jee Geronimo reports.

(My dream is to finish my studies and find a job so I can help my parents.)

Life was tough for Ayesha Lagayan and her family even before the fighting broke out between government troops and rebels in Zamboanga City last September 2013.

During the siege, her family lost its home, her father lost his job, and Ayesha lost her school.
For the rest of the year Ayesha and her classmates studied in tents.

JEE GERONIMO, REPORTING: Sta. Barbara Central School was part of ground zero during the Zamboanga siege. The school has been off limits to students since September last year for fear these bullet holes will only remind them the horror of the almost 3-week ordeal.

Now a deserted area, Sta Barbara Central is one of 3 schools most affected by last year's fighting.

But there's a silver lining behind the black cloud.
Despite the devastation, the schools record high graduation rates.

The secret to success? School officials tracked students and encouraged them to go back to school.
Education department official Pete Natividad says Sta Barbara school house will not be ready for students by next school year.

PETE NATIVIDAD, OFFICER-IN-CHARGE, DEP ED ZAMBOANGA CITY: For the meantime, one of the consideration is to find an alternative place.

You will see how crowded, how small is the space.

But classes continued despite the shortage in classrooms.

(That's another thing we need to consider - where are the bulk of IDPs coming from Sta. Barbara.)

Kasi some of them are still in the grandstand, some are homebound, and some are realigned to some transitory sites.

The department will open summer classes for students who stopped going to school.
Teachers try to make classes as fun as possible so kids keep coming back.

Ayesha will not be taking summer classes.
Against all odds, she finishes elementary as the valedictorian of her class.
Her graduation speech says it all.

AYESHA LAGAYAN, VALEDICTORIAN, STA BARBARA CENTRAL SCHOOL: To end, I would like to say that the greatest miracle of our success in life will not be that we finish. It will be that we had the courage to begin.

The first dive by a mini-submarine hunting for the missing Malaysian Flight MH 370 finds nothing.
The US Navy says the mission was aborted Tuesday after reaching the machine's maximum operating depth of 4,500 meters or 15,000 feet.
The unmanned autonomous underwater vehicle or AUV Bluefin-21 is set for a second sonar sweep of the Indian Ocean seabed during the day.
The AUV managed to get six hours worth of data.
A US statement says "the data was analyzed and no objects of interest were found."
The Navy estimates, it will take the AUV from six weeks to two months to scan the entire search area.

The Guardian and the Washington Post share a Pulitzer Prize for reporting on the vast US cyberspying network exposed by former National Security Agency contractor Edward Snowden.
The two newspapers win the award for public service journalism for sparking debate on secretive NSA programs.
Both newspapers relied on documents leaked by Snowden.
The leaks embarrassed the US government and strained relations with allies.
In a statement, Snowden says the Pulitzer decision is "a vindication for everyone who believes that the public has a role in government."
But Republican congressman Peter King hits the move on Twitter, saying, "Awarding the Pulitzer to Snowden enablers is a disgrace."
Among the other Pulitzers, The Boston Globe staff wins the breaking news award for its coverage of the Boston Marathon bombings.
The New York Times wins awards for breaking news photography and feature photography.

STORY 8: THE wRap: YOUR WORLD IN ONE READ

At number 6, the prosecution accuses Oscar Pistorius of faking emotional reactions to dodge tough questions about the death of his girlfriend during his murder trial.
Frustrated with the athlete's frequent crying, prosecutor Gerrie Nel accused Pistorius of fake tears saying
"Mr Pistorius, you're not using your emotional state to escape, are you?
You're getting frustrated because your version is improbable and you're getting emotional."
During six days of testimony, Pistorius often broke down when asked about the moments he fired the 4 shots killing Reeva Steenkamp.
He has repeatedly claimed he fired the shots, fearing an intruder was behind the bathroom door.

At number 8, a report by an analytics group says most mobile games only have a day to catch a player's interest. Y
According to Swrve's New Players Report, only 33.9% of those trying a game keep playing after the first day.
Swrve also notes a "steep fall off," with only 5.5% continuing to play a game after 30 days.
Reacting to the report, videogame veteran Ben Cousins says 40% of players returning on the second day is "great numbers, a sign of a real hit."

At number 10, "King Charles III," a play with an audacious plot about the British royalty, opens in London to glowing, if somewhat scandalized, reviews.
The New York Times reports the new play by Mike Bartlett imagines Charles as paranoid and power obsessed king, dissolving Parliament and parking a tank outside Buckingham Palace.
Prince William's wife, Kate, plays a decisive role in saving the monarchy and preventing civil war.
Ads for the play showing the real Prince Charles dressed for his coronation were banned until they were replaced with a heavily pixelated version.
The New York Times says it "explores what might happen if a British monarch bucked centuries of tradition and refused to rubber-stamp the will of Parliament."

For the full top 10 visit Rappler.com's 'the wRap.'

Sky watchers from North and South America get a glimpse of a 'blood moon' in this month's total lunar eclipse -- the first of 4 consecutive lunar eclipses this year and the next.
Pictures of the blood moon, with its distinctive crimson hue go viral online.
Some posted vivid photos, while others made up memes, like Miley Cyrus' red wrecking ball!