#EDSA30: One memorable meeting on Feb 23

Ninoy Aquino’s return to the country, the treacherous and brutal manner of his death and the collective grief of a people transformed an entire nation. I recall lining up to view the bloodied Ninoy at the Santo Domingo Church, in the second half of August 1983, and there among the people at the long queue were Noel and Mariel Tolentino and other companions from Lakasdiwa days.

I had come back from Latin America the year before, and had not seen them for a long stretch of time. But it seemed as if we just saw each other yesterday, and thus the first words we exchanged were brief and pointed: “Tara na!”

It was back to the struggle against a cruel, and tyrannical regime that violated the basic rights of people, made them to disappear or had them “salvaged,” detained arbitrarily, rigged the votes, amassed millions in what became known as a kleptocratic crony capitalist system, censored the media and destroyed our democratic institutions – no matter how imperfect they may have been.

I recall the incessant protest marches in the first half of the 80s such as the Lakbayan from San Pablo City to the Luneta; the Sakbayan – a motorized caravan from the Bicol Region to Manila; the confrontations at the Welcome Rotunda in Espana, facing the water canons, the tear-gas, bullets as well as rocks; the prayer vigils at the foot of Mendiola Bridge; the Boycott Movement against participation in the meaningless Batasan Pambansa elections in 1983 or the posture of “critical participation” in the 1986 “snap elections” where Cory Aquino challenged the dictator Marcos in patently rigged elections which finally enraged people and resulted in the loss of fear: our lives, so to speak, were no longer our own. 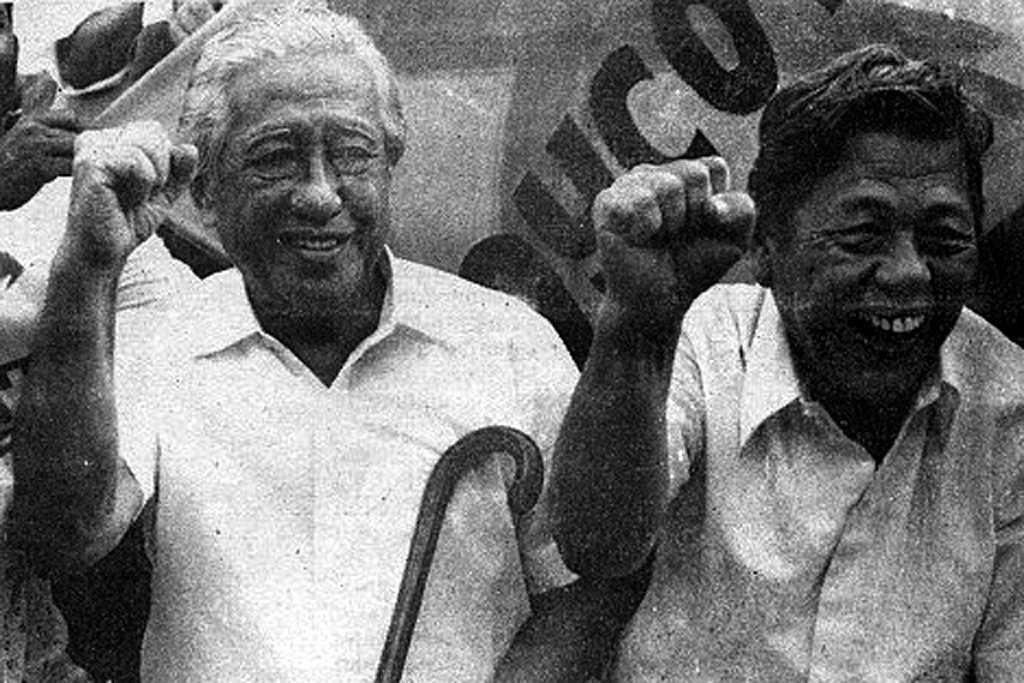 There was one particular meeting I will never forget.

On the evening of the February 22, 1986, I heard the appeals made by Cardinal Jaime Sin and the late Butz Aquino on Radio Veritas for people to converge on the streets fronting the military camps to show support for the military reformers who had finally taken a stand against the dictatorship.

It was a beautiful night, I recall, nearly a full moon in the sky which encouraged me to go out. Thus, I went to EDSA unsure as to the response of citizens to spirited calls to mass in the streets around the camps.  As people continued to pour in around the gates of the military camps, what struck me more than anything else was a certain loss of fear manifested in the “joy of being together in the streets” and how people from different walks of life exuded confidence coupled with collective courage – backed by a calm demeanor bordering on prayer.  I became convinced early on that  “something serious could be brewing.” Amazed to see people in their thousands, I felt a growing certainty that this gathering of people had the potential to make a difference in the life of the nation.

I was in Ka Pepe Diokno’s home the next day, and he asked me to drive him in my old run-down VW Beetle car to number 59, 13th Street in Broadway, New Manila for a meeting. It was the residence of one of my father’s best friends who was a co-founder of the Civil Liberties Union (CLU), the revered statesman, Senator Lorenzo Tañada. Since it was a Sunday, he was in his rest house in Tagaytay, and he had to be fetched by his son, Bobby. A third person in the meeting was a Liberal Party stalwart who was both a victim of the Plaza Miranda bombing and an exile recently returned home, Senator Jovy Salonga.

Ka Pepe was adamant that what was happening was a standoff between two factions of the military and therefore warned that ordinary people could be “cannon fodder” should citizens in their audacity decide to come out in the streets. Jovy Salonga took a cautious position, and wanted to wait out developments till there was more clarity. Ka Tanny was vocal in his determination to seek out the leadership of the military reformers to ensure that there was no turning back in their decision to distance themselves from the dictatorship they had served for so long. His instinct was to turn this risk into a political opportunity.

Soon after the meeting, Bobby accompanied his father to the military camp and as soon as he entered the “command room,” they were greeted by General Fidel Ramos, “It is an honor that you are here.” Defense minister Juan Ponce Enrile then said that now he was certain that he had “done the right thing.”  After getting the assurance that there was no turning back, Ka Tanny was dead certain that this was for real.  Ka Tanny came back convinced that civilians in concert with military reformers could mount “people’s power” with a capacity to bring down the dictatorship.

Turning point, no turning back

The ranks of those who had camped out in the streets had swelled to perhaps over a million, at one point, stretching from the confines of Cubao to the corner of Edsa/Ortigas Avenue, and beyond followed in their millions by people tuned in to their radios. However, in the evenings the crowds would thin since most needed to catch up on sleep and much-needed rest.

During the afternoon, I had seen how religious nuns with rosary in hand pleading with the boys on top of the tanks that had come from the direction of Fort Bonifacio to stop their engines and partake of refreshments.  I talked with several soldiers, one shod in shoes without soles, and they asked me where the communists were since they were told by their commanders to quell a communist revolt.  They were instead surprised to find themselves face to face with seminarians and students, housewives carrying their children, and devotees carrying the statues of the Blessed Virgin.

The soldiers were confronted by the people they were bound to protect, not by the so-called “enemies of the state.” Later in the day, in the streets of Santolan, General Tadiar and his troops who had been ordered to disperse what they were told was a “motley crowd” found themselves staring into the eyes of determined seminarians and devout priests, women who could have been their mothers and sisters who defended every inch of the ground they had won and would not budge – even at the cost of their lives, it seemed.  People would not move, they stood their ground.  It was in this way, that a peaceful retreat had been negotiated, extracted rather, from a military that had now lost their compass.

At the break of dawn the next day, Monday the 24th of February, the third day of the people’s siege of the military camps in EDSA, the roar of engines from the skies broke the ominous silence.  Seven Sikorsky Helicopters from the 15th Strike Wing of the Philippine Air Force hovered above the military camps. I thought that what we had feared most was about to pass – an aerial assault to disperse the crowds assembled around the camps.

Almost instinctively, we sang the “Our Father.” I do not now remember if what we sang was “Ama Namin” or the “Our Father” but one thing was certain: it was sung like a prayer, and with all the fervour at our disposal after a night almost without sleep in the streets.  As the Sikorsky helicopters descended on the Camp Crame parade grounds, we experienced the surprise of our lives. From the helicopters that seemed camouflaged in the dark, out came some 16 pilots with white handkerchiefs sporting the Laban signs while long guns, M-16s perhaps, slung on their shoulders.  That seemed the turning point of the people’s power experience from where I stood.  We had expected a bloodbath and were ready to give up our lives; we experienced redemption instead. The Tuesday that fell on 25th February 1986 was unlike any day I had ever experienced.

In the morning at Club Filipino, Cory Aquino was sworn in as President by Justice Claudio Teehankee.  On the other side of the Pasig, in Malacanang Palace, chief justice Ramon Aquino was swearing in Ferdinand Marcos as president after more than 20 years in power – when all of a sudden television screens went blank as a sharpshooter had disabled the transmitters of pro-government television channels – a sign which seemed to signal the end of an era.  It was nearly high noon, and then events began to unravel at a pace that seemed so unreal.

US helicopters landed on palace grounds and brought the Marcos family including their entourage to the Clark airfield on their way to exile in Hawaii though the dictator had insisted on Paoay – perhaps to mount a counter move from the North.  However, it was not to be and the dictator fled. Prominent among the escapees was son Bongbong who seemed comfortable in his military fatigues.

It seemed to be all over but the shouting, as some would put it.  But not really.  Now, the harder part had just began.  I recall a first meeting after the dictator fell with friends Noel Tolentino, Edgar Valenzuela, Dodi Limcaoco, Butch Abad among others:  to rebuild, to repair damage done and to reconcile was going to be a lifetime’s task.

I remember seeking advice from Ka Pepe Diokno as he lay seriously ill at his home in 3rd Street, New Manila, while we were grappling with issues at the Constitutional Commission which I had become part of in 1986.  There were three critical concerns he underlined:  human rights, social justice and national sovereignty.  He also insisted on the framework for the peace negotiations which had then floundered after the killing of farmers at the foot of the bridge in Mendiola in January of 1986:  “jobs and justice, food and freedom.”

Fast forward to 2016, on the eve of national elections. We are once again called to reflect and rethink the way forward.

We had put our lives on the line thirty or so years ago. Now, in less dramatic terms, we are once again asked to take a stand, to remain steadfast, to envision a future bigger than ourselves so that we are able to build a future different from the past; to create a “nation worthy of our children” which was Ka Pepe’s dream and that of countless others who gave up their lives in this marathon journey which remains unfinished. – Rappler.com

(Prof Ed Garcia is one of the framers of the 1987 Constitution. He served as researcher at Amnesty International and peace envoy at International Alert, both in London. He was one of the co-founders of Lakasdiwa and Kaakbay – movements that sought to raise awareness on social issues and mobilize people.  Previously, he taught political science at the University of the Philippines, and Latin American studies at the Ateneo’s interdisciplinary studies department. Currently, in his post-retirement he serves as part-time consultant on formation at FEU Diliman.)