7 Last Words reflection: 'Today you will be with me in Paradise' 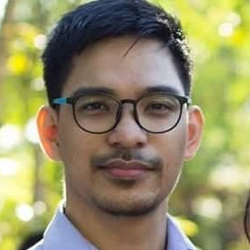 Two thieves hung crucified to Jesus’ left and right. They were the ones with whom Jesus spent his final hours, journeying with him on the way to the cross. Both saw how things unfolded for this man donned with a crown of thorns and mocked as King of the Jews. Both witnessed what kind of “Good” happened that Friday afternoon, but only one responded in hope.

The crowds that gathered pushed against each other; the soldiers kept them at arm’s length. They were jeering, shouting, and weeping – a mix of emotions and reactions from each group of people that Jesus encountered. From the religious leaders, to tax collectors, to the common folks, the young and old, women and children – all pushed against each other just to get a view of the man accused of treason and incitement to rebellion. But who is he really?

Some remember him as an itinerant preacher from the backwater village of Nazareth, who went from town to town in the Roman-subject Palestine. Some remember him as a miracle worker, who healed the sick and exorcised the demon-possessed. His followers confessed that he was the Messiah, the Christ of God.

Just a few days ago, the people welcomed him as king as he entered the city of Jerusalem, adoring him with palm branches. But why was he brought to the authorities to be executed? If he was the true Jewish king, shouldn’t have the religious authorities, who secretly resented Roman rule and intensely longed for Israel’s independence, sided with him?

What did he do to deserve flagellations that ripped his flesh? What did he do so that he was left hanging and bleeding, almost naked, on a cross? But what was surprising is that he did not resist the cruelty and injustice done to him.

What sets the gospel of Luke apart from the other gospel accounts was its focus on how Jesus generously related with the weak, the outcast, and even those who stood hostile against him and his people. He lived and taught the ways of compassion and justice, announcing a kingdom that brings about the great reversal – the proud are brought low, the humble exalted. That is what brought Jesus to the cross. His life and teachings about a kingdom of compassion and justice directly confronted the values of the ruling kingdoms. Both religious and political powers were threatened, so they plotted to neutralize the threat. Now at the cross, they continued to mock him as Messiah, as king and savior. If he was but a madman, they would’ve just ignored him, but if his kingdom proved to be true, he is probably king and savior.

Death by crucifixion is the most excruciating and humiliating way to punish criminals during those times. The cross was a symbol of shame and defeat, publicly done so as to serve as warning to the people. So a king on a cross is not a triumphant king, because a king cannot rule if he is powerless, and he will be unable save if he cannot save himself. The mockery of the crowds and that one criminal beside Jesus seemed logical. It started to look as if the kingdom he proclaimed was but a failure.

But the other thief saw differently. While the gospel narratives of Matthew and Mark emphasized the forsakenness of Jesus, Luke also focused on the abiding presence of the suffering Christ. While his disciples fled for their lives, Jesus remained and gave his. While the crowds kept throwing insults, Jesus never stopped forgiving. Just as Jesus generously opened his hands to the outcasts, he was doing the same for the people murdering him. Just as he did not withhold healing from those who asked of him, he did not withhold forgiveness to those who were humiliating him. As great as the aggression of the crowd was towards him, much greater was his passion in reconciling all humanity to the presence of his Father.

The penitent thief had seen all this. Although sharing the same fate, he admitted his deserved punishment and defended Jesus’ innocence, and now only asks, “Remember me when you come into your kingdom.” Jesus, generously giving until the end, promised more than remembrance. The penitent bargained for future acknowledgment, but the Savior King promised immediate and eternal fellowship: “Truly, I say to you, today you will be with me in Paradise”.

Lent began with the remembrance of our mortality, but it culminates with the assurance and hope found at the cross. What seemed to be a symbol of humiliation and death became the symbol of exaltation and life. In a place called the Skull, what seemed to be considered dead was the only One who could bring us true life. While those who hold on to power aspire to rule on a throne and annihilate threats and enemies, Jesus’ rule gives up power to bring peace and build a family.

As we reflect on Jesus’ words to the penitent thief, let us consider these: To receive and be received in the Presence of God, this is what Paradise looks like. To live with a passion for justice, mercy, and love, this is what the kingdom of God looks like. What made that first Good Friday good is that even in the extreme capacity of man for evil and injustice, it did not stop God, in Jesus, to reveal the extent of his goodness, the extent of his love.

Sisters and brothers, we are witnesses to this. Will we respond in hope, and receive and be received in Paradise today? As we receive new life, may we now live in the full expanse of God’s goodness, just as our Savior King did. – Rappler.com

Majar Sabio is an evangelical Christian and life-long learner, curious about the mysteries and intricacies of the inner life, and passionate about building spiritual communities. He loves burrito, and spends most of his time scrolling through cat and dog photos on social media.

A video-reflection on the second of the '7 Last Words of Jesus Christ' presented by St. Paul's Audiovisuals.

Here are more reflections on the "7 Last Words" of Jesus Christ from different Christian groups: