[OPINION] I do not believe in coming out 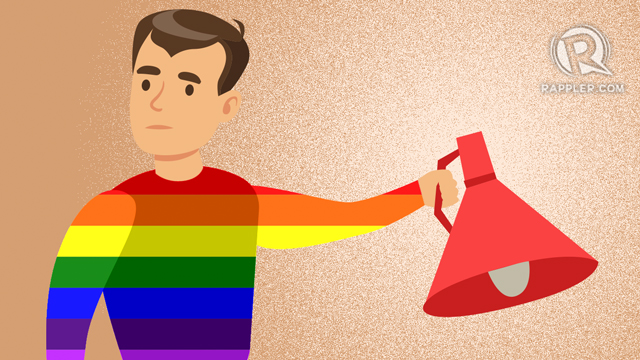 It has been 8 years since I identified myself as gay yet I still do not have a coming out story, nor have I thought of having one. I never felt compelled to come out and never saw it necessary in order to live my life as a gay person.

Coming out is when someone announces they are homosexual to a certain individual or group. It's delivery varies, depending on one’s intended audience: through social media posts, autobiographies, televised interviews, blog and vlog posts, and sit-down conversations. Perhaps the most common set-up is where you sit down with your family and blurt out, “I am gay”. (READ: Letting love win: How my parents' love made me a winner)

I do not believe in coming out because it is a socially-constructed duty automatically given to any individual who is not heterosexual. As we are living in a society that promotes heteronormativity or the belief that heterosexuality is the norm, coming out somehow justifies the need to explain my preference and choices, as well as clarify my decision of identifying myself as gay.

I consider coming out as oppressive because the act makes me feel like I owe anyone the explanation of my identity and I have to be sorry for its implications.

I do not believe in coming out because it seems like a confession – an event that discloses someone’s secrets which normally are considered as sins. However, being gay is not a sin that requires an apology, and not coming out does not equate being secretive. Secrets are intentionally being kept from concerned parties. Sometimes we even resort to lying just to evade spilling secrets. As for me, if no one is asking, then why tell?

I do not believe in coming out because the idea only reinforces the concept of gender binarism – of which only two genders are acceptable in Philippine society. Coming out encourages the thought that heterosexuality is the default and not conforming to this needs to be announced. Given this norm, not doing what is expected is already an act of dissent.

I do not believe in coming out because it trivializes my identity. I do not put premium on my gayness as a defining factor of who I am. I am more than my gender as I have a career to pursue, dreams to achieve, and advocacies to advance. Being gay is just one aspect of a gay person. Aside from gender, an individual still has a lot to offer.

I do not believe in coming out because to a certain degree, it is deemed as a tool to “legitimize” my gender identity since others will be able to confirm it. People always assume coming out means I can do anything I want without thinking of other people’s opinions and without hiding anything that reflects my identity. No fear, no inhibitions, no restraint. But do I really need to accomplish this task in order to live freely and feel accepted? To be recognized by the community and be tolerated?

This should not serve as a requirement to live my life, to deserve respect from anyone, and to enjoy my rights as a human being. Acceptance must be given to anyone regardless of gender and regardless of whether the person has come out or not.

I do not believe in coming out and not doing so is a problem that I shouldn’t stress about. Nonetheless, I completely understand that for others, coming out is a way to liberate themselves, and I fully support them on their choice. I have a lot of respect for people who have done it and I admire their courage amidst the negativity sent their way because of it. Their stories have inspired many, including me. (READ: 'Love, Simon' and lessons on coming out)

Nevertheless, not coming out does not mean being ashamed of our identity or being weak either. We who have chosen not to come out are just as brave and as admirable as those who have.

Let us remember that it is each gay person’s decision to come out or not. It is a right that cannot be taken away by anyone and a personal choice. Coming out is a personal narrative. Therefore if someone decides to do so, it must be done at their own pace and without intervention from others. Being aware of this choice is all that matters.

Not coming out does not mean I am repressing myself. I am living as if I have come out, therefore I do not see the point of sitting down with my family and telling them that I am gay. The most important thing is I have fully accepted myself which perhaps is how I define coming out. Being confident in my own skin is already enough, and if someone asks for my gender then I would be more than proud to say, “I am gay.”

I hope that the day would come when coming out is no longer an event to confess and a duty that needs to be fulfilled, but rather a part of ordinary conversations among people.

I do not believe in coming out but did I do that just now? – Rappler.com

Hans Madanguit is a member of Mindanao Pride, an organization of LGBTQ+ rights advocates and human rights activists in Mindanao. Hans also advocates for women's economic empowerment and gender equality through his work with SPARK! Philippines. Hans spent his undergraduate years in UP and took advanced studies in Europe.