[OPINION] What is the need for this anti-terror bill? 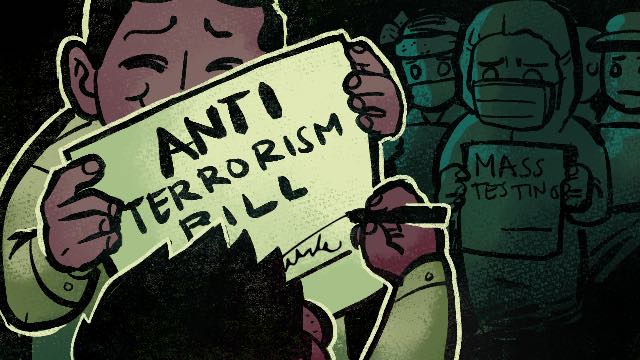 Never mind the propriety or wisdom of deliberating upon an anti-terror law in the middle of a global pandemic, the provisions of the anti-terror bill propose to grant to the government new and broad powers that arguably run counter to basic constitutional protections, and lend themselves to abuse by an increasingly unpredictable and autocratic government.

I haven’t read the version that is being discussed in the House of Representatives, but I understand that the version that will likely pass third reading will be more or less the version approved by the Senate (under Senate Bill No. 1083).  I base my comments on this version of the proposed law. (Editor's note: As of publication, the bill has hurdled Congress.)

On the wisdom of the proposed law

What is the need for this proposed anti-terror bill? Or perhaps more precisely, what need is so critical that the bill had to be certified as urgent so as to exempt the House from observing the three-readings-over-three-days requirement of the Constitution? We already have the Human Security Act. It has been part of our statute books since July 15, 2007. The proposed anti-terror bill seeks such powers that, in substance, is already granted to the government under the Human Security Act.

What then is in the proposed legislation that is not already in the Human Security Act? First, it expands on the definition of terrorist acts. Notably defined as criminal actions under the proposed law are acts that are invariably tied to rights of speech, expression, and association, such as inciting to commit terrorism (Section 9) and recruiting and membership in a terrorist organization, including the publishing of advertising or propaganda (Section 10). Second, it allows ex parte determination by the executive of persons and organizations as terrorists or terrorist organizations (Section 25). And third, it extends the period for warrantless arrests and detentions from 3 days under the existing Human Security Act, to 14 and even 24 days (Section 29).

Again, I ask: why the need, and in fact, the urgent need for such amendments? The timing, in the middle of the COVID-19 pandemic, is telling.

On substance of the proposed law

To the extent that we can trust our magistrates to properly discharge their duties in the exercise of their judicial functions, many of the powers granted to the executive under this law (mainly, surveillance and wire-tapping of suspects, and proscription of persons or organizations suspected of being terrorists) are subject to prior authorization from the courts.  In fact, many of these powers – with the corresponding judicial safeguards – have already been provided and are currently enjoyed by the executive under the existing Human Security Act.

What to me is problematic, however, is Section 29 of the proposed law, which provides for the ability of the police and the military to detain without warrant persons suspected of violating the law for a period of 14 days (and extendable for another 10 days). This means that during these 14 or 24 days, no one can question, even by habeas corpus before the courts, the legality of a person’s arrest and detention.

At the same time, the threat of such an arrest could result in a chilling effect on our rights to protest and dissent, since this could conceivably be considered by relevant authorities as actions that are “intended to cause” any of the enumerated overt acts of terrorism. And couple this with the ability of the anti-terror council under Section 25 to designate persons or groups ex parte as terrorists — the result is that the government need only justify its warrantless arrest and detention of any person of up to 14 or 24 days, by claiming an ex parte determination that the person thus arrested and detained is believed to be a terrorist. (READ: In PH pandemic: Due process for allies, warrantless arrests for the rest)

Possible violations of the Constitution?

It will remain to be seen whether the government’s power to designate persons and groups as terrorists ex parte, or its power to arrest and detain persons suspected of terrorism without warrant will pass muster under the Due Process Clause and the Search and Seizure Clause of our Bill of Rights.

Section 1, Article III of the Constitution guarantees that no person shall be deprived of life, liberty, or property without due process of law. The most fundamental aspect of due process is the right to be heard. Would the ex parte determination allowed to the government by the proposed law, a determination that could result in the possible deprivation of liberty and property on the part of the person suspected of being a terrorist, violate this constitutional guarantee? The Supreme Court, in a series of cases upholding the right of the Central Bank of the Philippines to shutter banks without prior notice and hearing, said that  “...due process does not necessarily require a prior hearing; a hearing or an opportunity to be heard may be subsequent to the closure.” The Court thereby validated the ex parte actions of the government agency because “its actions [are] subject to judicial scrutiny as provided by law.” [see Rural Bank of Buhi, Inc. v. Court of Appeals, G.R. No. 61689, 20 June 1988, and Central Bank of the Philippines and Tiaoqui v. Court of Appeals, G.R. No. 76118, 30 March 1993)]

By the terms of the anti-terror bill, the government’s ex parte determination that a person is a terrorist may result in the freezing of his assets by the Anti-money Laundering Counsel and, more immediately, his subsequent warrantless arrest and detention. These actions deprive the person of property and liberty. And what of due process? While the bill does not provide for any specific judicial recourse for such ex parte determination, and in fact, the grant under Section 29 of the power to make arrests would mean the inability of anyone to question the government’s continuing warrantless detention for periods of up to 14 and even 24 days, these powers are, in theory at least, nonetheless subject to the general power of the courts “to determine whether or not there has been a grave abuse of discretion amounting to lack or excess of jurisdiction on the part of any branch or instrumentality of the government.” [Section 1, Art. VIII, Phil. Const.] This grant of general judicial power could be cited as basis to argue that the anti-terror bill, including its ex parte determinations, satisfy due process requirements since the government’s actions would, in any event, be “subject to judicial scrutiny as provided by law.”

Apart from issues of due process, the warrantless arrest and detention of suspected terrorist is problematic under Section 2, Article III of the Constitution, which prohibits unreasonable searches and seizures. The protection does not, of course, prohibit arrests, only that these arrests should be reasonable. And the general measure of reasonability under the Constitution is that such arrests proceed only after a warrant has been issued by the courts. Exceptions exist, but only in narrow cases, such as when a person is arrested without warrant because he was in the act of actually committing a crime. The anti-terror bill creates another exception under its proposed Section 29, and the only standard provided by the statute is that the person to be arrested without warrant is “suspected of committing any of the acts” defined as terrorism under the law. It does not appear to be necessary that the person sought to be arrested is in the process of actually performing overt acts of terrorism: mere suspicion is sufficient. The question, then, is whether these kinds of arrests could be considered reasonable within our constitutional framework? (READ: Carpio: Once a law, anti-terror bill can be questioned in court right away)

On this point, it is also worth noting that a version of Section 29 on warrantless arrest and detention had actually already been adopted under the Human Security Act. The Supreme Court, in Southern Hemisphere Engagement Network Inc. v. Anti-Terrorism Council (G.R. No. 178552, October 5, 2010), upheld the general constitutionality of the law, including the seemingly problematic warrantless arrest clause, but mainly to technical grounds that the parties bringing the action lacked legal standing to do so. It would seem, therefore, that should the anti-terror bill pass into law, we will have to wait for an actual exercise by the government of its new and expanded powers, before the validity and constitutional of the law can be considered “ripe for adjudication.”

Until then, the anti-terror bill, once it becomes law, enjoys a presumption of constitutionality, and the executive will, from that time, have the ability exercise all powers granted to it, including – and rather ominously— the ability to declare persons as terrorists ex parte, and the ability to arrest them without warrant and to detain them without judicial remedy, for up to 14 and even 24 days.  Do we trust our government enough to properly exercise these powers? – Rappler.com

PJ Bernardo is a partner at a Singapore-based law firm and oversees the firm’s Myanmar and Cambodia offices. He was a member of the faculty of the Ateneo Law School, where he also received his law degree in 2005. He pursued post-graduate studies in international finance at Harvard Law School in 2012. While he has been practicing law abroad since 2013, he has maintained strong research interests in Philippine civil, constitutional, and commercial law and practice.