[OPINION] Why should young Filipinos in the diaspora care about Martial Law? 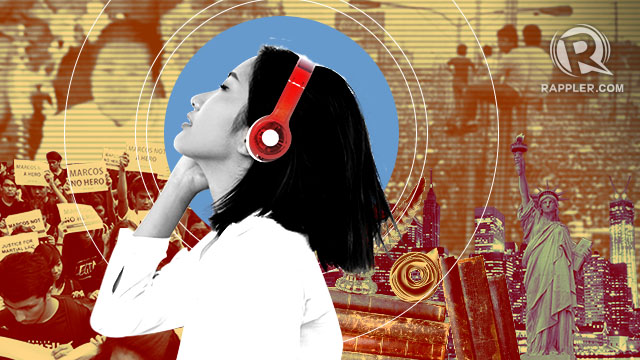 On Monday, February 25, the Philippines will mark the 33rd anniversary of the 1986 People Power Revolution – the globally-lauded peaceful movement that ended the more than two-decade rule of strongman Ferdinand Marcos.

Yet, when I was growing up in the United States, to where my parents emigrated in the late 1980s, I didn't hear about Martial Law at all.

Even though my parents and their siblings were raised during the entirety of Martial Law, I only learned about it from books and media. When I started knowing something about it, I started asking my family about their experiences. Obligingly, they told me about curfews, the protests rocking the streets around the University of Santo Tomas, near which my father's family lived. They told me of relatives who had been activists, of neighbors whose children disappeared for their organizing. They told me about going to EDSA during the peaceful revolt, the rise of Corazon Aquino to the presidency, and the tears shed in joy.

But why is it that I didn't learn about it from them? Why did I have to encounter this important part of Philippine history elsewhere?

In some ways, it makes sense. This happened in the past, 5 years before I was born, and in a country I didn't grow up in. Sometimes, the stories they relayed would tell me of danger, of grief.

In the US, classes about the history of other countries are rarely taught, and the Philippines is not often among the countries covered in detail in history books. Martial Law didn't seem to affect my American life much at all.

But this isn't true. For one, the US did not only occupy the Philippines from 1898 to 1946. The American government also supported Marcos' dictatorship for reasons of maintaining military bases, preventing another communist government in the region, and the priorities during the Cold War.

According to a New York Times article written after the ouster of Marcos, President Ronald Reagan considered him a friend and indeed admired him, only reluctantly acceding to demands from Washington officials to withdraw public support when it was clear that Marcos was no longer a viable ally.

Activism in the US

Furthermore, anti-Marcos activists in the US were not safe from his dictatorship, under which Amnesty International estimates 70,000 were detained, 34,000 tortured, and 3,240 killed. (READ: Worse than death: Torture methods during Martial Law)

Filipino-Americans Silme Domingo and Gene Viernes, labor activists and organizers for the Union of Democratic Filipinos which led demonstrations against Marcos in the US, were murdered in their office in Seattle on June 1, 1981.

Domingo's sister, Cindy, and other family and friends led the Committee for Justice for Domingo and Viernes which investigated the murders for 8 years, before a US federal court found that Marcos was indeed guilty of ordering the executions, with the knowledge of the US government. The two were later honored as martyrs at the Bantayog ng mga Bayani on November 30, 2011.

It's not just that Marcos' violence reached across the ocean, but also that the Marcos family remains in power and are inextricably linked with the current Filipino administration.

President Rodrigo Duterte approved the burial of the strongman at the Libingan ng mga Bayani. Presidential daughter Sara Duterte campaigns with Imee Marcos. Allies like former Senate president Juan Ponce Enrile have bolstered Imee and Bongbong Marcos' attempts to minimize their parents' crimes. Martial law in Mindanao was extended for the third time last December, and the deadly drug war in the Philippines remains under scrutiny by the international press.

We in the diaspora can't afford to forget Martial Law. The Filipino community has, despite being scattered across the globe, remained connected for centuries. On the most personal level, many of us in the diaspora still have relatives in the Philippines. But on a wider scale, the Philippines and the United States' relationship remains tightly entangled – economically, politically, and militarily.

Anna Cabe is a Fulbright Student Scholar at the Ateneo de Manila University where she is completing a novel set during Martial Law. She earned her Master of Fine Arts degree in creative writing from Indiana University in 2018, where she served as nonfiction editor of the Indiana Review. You can learn more about Anna at annacabe.com.