[OPINION] With love, from Deadpoor

Donning my red mask and holding the sign which read: “they make you dead or they keep you poor,”  I was fortunate enough to be part of the United Peoples’ State of the Nation Address.

Together, we marched the streets to shed light on the issues that surrounded the leadership of President Rodrigo Duterte – from the effects of his economic policies on the majority of the masses, to the bloodshed that has accompanied his campaigns against drugs and “tambays.”  (LOOK: IN PHOTOS: Thousands hold SONA 2018 protests around PH)

Then I saw the news.

Former President Gloria Macapagal-Arroyo, involved in allegations of cheating the 2004 presidential elections and who was almost convicted in plunder, was elected Speaker of the Lower House. (READ: Gloria Arroyo's firsts as House Speaker)

My heart further sank as President Duterte delivered his speech, but the march still had me believing in the capacity of Filipinos to rise to the occasion and demand justice.  (READ: A 'pleasant surprise' or 'boring' Duterte SONA 2018?)

These aren’t new “criticisms.” But I cannot help but ask why people feel so inconvenienced by other people airing legitimate grievances, while those in power were openly deceiving them. Perhaps they sincerely don’t understand. Or maybe they just want to talk, regardless of what it says about their character. But I’d rather believe the former, so I can still allow myself to explain, in the hopes that some people may think at least a little differently.

To shed light upon an issue; to demand accountability or punishment; or to show support people or initiatives: there can be many reasons for a mobilization. But under the surface of what a rally is for is human pain and the need to deal with it.

A mother who lost her child because of Tokhang might be rallying to gain not only justice, but comfort. A worker who was recently promised by the President and Labor Secretary Bello that they will be regularized but was instead fired might be rallying to express unity with his co-employees and other workers.

Sometimes, it’s not enough to feel or experience something alone. People tend to assemble to give each other support, comfort, and hope: to remind each other that we are together. This is a simple practice of empathy. Activists call it solidarity.

If we were president 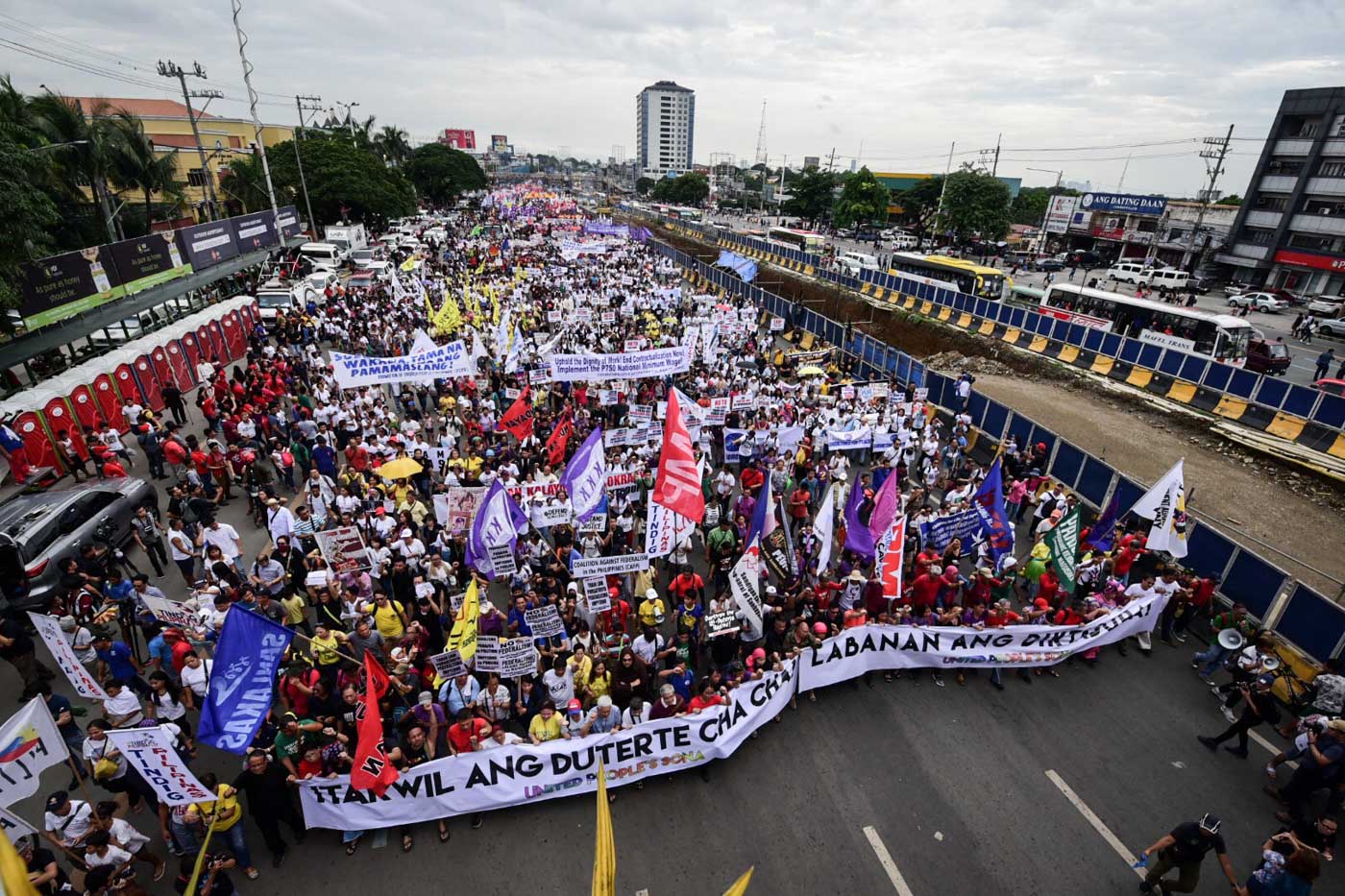 Knowing how democracy should work, we find our current predicament worse than problematic. Not only is the government failing to do what those who are supposedly in power – the people – want, it's also doing the exact opposite.

The President said in his SONA that he cares about human life, not human rights. But if he truly does care, he should know that where there is human life, there are human rights. What he was saying, really, is that in his rule you cannot have both rights and life. If you want to live, don’t expect to have you political right to dissent, or your economic right to survive with dignity as well.

They’ll make you dead or keep you poor

Perhaps this person has legitimately strived to better his condition or saw how exceptional people went from rags to riches. But believing in the possibility for success in others is one thing, condemning those who tried and failed is another – especially in a society where not many people have the opportunity to even try. (READ: It's about privilege, not about working or studying hard)

Dying poor and being killed because you are poor are also two very different things. There's already a problem when some of us think that some people deserve to die in poverty but it's more troubling if we accept that the lives of the impoverished matter so little that only one dead poor kid per week because of the war on drugs is an improvement – or an achievement.

Years from now, a younger generation will ask us what we did while our fellow Filipinos were suffering. I doubt whether we can proudly say that we were typing away our rage at injustice on social media. I'm sure no one will brag about how they were online, mocking other people's pain with words.

It would be beautiful, if we could answer them: “We were with them. We had to be. We were human too.”– Rappler.com

Vin Buenaagua is an advocate of human rights, ecological justice, and people-centered development. He is a graduate of BA Political Science in the University of the Philippines and a member of the Sanlakas multisectoral coalition. His membership in the X-Men is pending.