Emperor Akihito: Not in his father's shadow

Yet in 2006, China was not yet building artificial islands in the Pacific and America was not yet “pivoting” to Asia, making this more momentous than a 50th anniversary visit.

Akihito’s trip comes at an interesting moment in the geopolitics of the Asia-Pacific region.

It is hard to ignore the fact that the trip comes at the wake of two significant developments: Japan’s passage of a set of security laws that throw away the state’s 70-year-old pacifist garb and the EDCA between the Philippines and the United States (US) that welcomes back American forces to Filipino shores.

The visit seems to bear good tidings from one American ally to another, both indispensable to American military presence in the region.

But the irony is that Akihito represents post-war pacifist Japan. The period of reign that began in January 1989 is called Hesei, which means “peace everywhere." He is increasingly at odds with Prime Minister Abe Shinzo’s ahistorical, if not revisionist approach to foreign relations. (READ: Should Japan apologize for WWII?)

In Japan, the two stand on opposite poles: the politically powerless emperor represents Japan’s pacifist identity, while the country’s political leader appears set to destroy that identity. 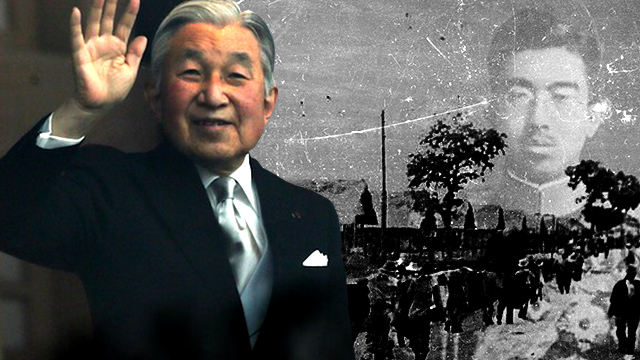 The Emperor and Japan’s postwar pacifism

It may not be common knowledge that a country as economically powerful and technologically advanced as Japan does not have a full military. This is the reason why in the realm of international politics, the land of the rising sun is considered “abnormal."

For almost 70 years, Japan has relied on US for security. Thus far, it has not been seriously attacked nor threatened by other states, with the exception of the North Korea’s rogue nuclear and missile tests. Japan hosts instead the US military bases, mostly in Okinawa, as America’s forward base in the Asia Pacific.

The reason for Japan’s peculiar state behaviour dates back to its defeat in the Second World War in 1945 and the 7 years of American occupation thereafter. The Emperor’s Jewel Broadcast speech on August 15, 1945 to announce Japan’s defeat to its people was a pivotal event for Japan for two reasons.

First, it marked the end of Japan’s imperial adventurism in Asia since the Meiji Restoration (1868). If the Greater East Asia Co-Prosperity Sphere symbolized Imperial Japan’s sense of noble mission to take Asia back from the “western imperialists," it failed disastrously as the Japan of the Showa Emperor, Hirohito, brought catastrophe across the region and upon Japan itself.

The Nanking massacre or the infamous Unit 731 were just tips of the iceberg. That the leaders of the Imperial Army were hell bent on fighting on to the last man than to suffer the humiliation of defeat prolonged war.

Japan was subsequently subjected to carpet bombing by the Americans which flattened nearly all of Tokyo, Osaka, Nagoya and other main cities except for Kyoto.

The war culminated with the Hiroshima and Nagasaki bombing, the first atomic bombing in the history of the world. All in all, depending on the source, there were between 5 to 20 million foreign civilian casualties and over 3 million Japanese deaths.

Second, it ended the modern Emperor myth. It was the first time for the public to hear the Emperor’s voice as a fellow human rather than a divine figure. The leaders of the Meiji Restoration gave the imperial throne an infallible position both in the spiritual and political lives of the Japanese, as a kind of divine father of the nation.

Any state action was authorized in the name of the emperor, so much so that prominent Japanese thinker Maruyama Masao called him the “portable shrine." Such belief gave credence to the multiple atrocities committed by the Japanese Imperial Army.

Thus, the Emperor capitulating publicly was among the most dramatic and shocking moments for the Japanese in their history. (READ: Japan releases master recording of emperor's war-end speech)

The surrender also marked the beginning of US Occupation in Japan. After the Supreme Commander for the Allied Powers, General MacArthur left the Philippines, his next task was to democratize and demilitarize Japan.

The position of the Emperor was among the most crucial, hotly contested issue during the occupation. As ordered, Hirohito denounced his divinity in the new year’s eve of 1946. Upon the ratification of the new constitution in 1947, the Emperor was formally stripped of all his sovereign powers.

Article 1 of the constitution states that his position is derived from the will of the people. Ever since, Emperor Hirohito remained within this parameter.

But Hirohito was never tried as a war criminal, although foreigners for a time considered him as the “Hitler of Asia." The occupying Americans feared that an emperor on trial would wreak havoc among the Japanese.

MacArthur not only protected Hirohito from being indicted, but as historian Herbert Bix notes in his biography of the Showa Emperor, “MacArthur’s truly extraordinary measures to save Hirohito from trial… had a lasting and profoundly distorting impact on Japanese understanding of the lost war."

Until now, differentiating Hirohito as a mortal and Hirohito as the divine emperor remains a dilemma for those who want to understand the perplexity of Japan’s postwar transformation from a war-monger, militarist state to its present peace-loving, passive state. Akihito inherits the historical baggage left by his father.

What do you tell the dead when you lose?

This is the second time for Emperor Akihito to visit the country that Japan occupied and left deep, defining scars in the land and its people.

It would be naïve for Japanese, (leaders especially) to assume that the Filipinos – or any other Southeast Asians that suffered the brutalities committed by the Imperial Army – would wholeheartedly welcome him without remembering the past.

He is, after all, the son of Hirohito in whose name so many people needlessly lost lives before 1945. So, Akihito cannot avoid being associated with the "sins of his father," however unreasonable that may be. (READ: Emperor Akihito turns 82 urging Japan to remember war)

But it is his words and actions in the recent that kept him at a certain distance from his father. Akihito’s apparent commitment to peace makes it difficult to doubt that his conscientiousness to do his part in bringing about proper closure to the memory of the Second World War by remembering.

He does so by paying respect equally to all the victims of war, be them Japanese, Filipino, Chinese or Korean. While stripped of any political role in the constitutional sense, he is nevertheless an institution of political significance as the embodiment of Japanese history itself.

In his book Embracing Defeat: Japan in the Wake of World War II, historian John Dower posed quite a disturbing question: "What do you tell the dead when you lose?"

This question placed a heavy burden on the Japanese who, unlike the victors, cannot console the souls of the fallen through re-telling a story of heroism and triumph. Remembering, and not forgetting, is arguably the most important function of the Japanese emperor in a defeated country of ancestor worship.

Speaking to and for the spirits of the dead is the business of the emperor, not the priests of Yasukuni Shrine or political leaders who deny the past as it is to the dead.

Akihito, turning 83 this year, is committed to sowing the seeds for a vision of East Asia different from the Pan-Asianist vision his father Hirohito left behind, but today’s China and the US may inadvertently recreate.

It is such commitment that could console the souls of the dead, that indeed, they have not died in vain. – Rappler.com

Haruko Satoh is a professor at the Center for the Advancement of Research and Education Exchange, Osaka University, and lecturer at Osaka School of International Public Policy. She has published articles on Japan politics, and Japan-China relations.

Carmina Untalan is a graduate student of Osaka School of International Public Policy, Osaka University. She is working on democratization and postcolonialism in US-Japan and US-Philippine relations.

Picture of World War II and Hirohito from Wikimedia Commons.