I feel some degree of pain as I watch this. I was a witness to the relationship that is now unraveling.

The Juan Ponce Enrile-Rene Cayetano relationship dates back to the years before they set up their law firm Pecabar. It dates back to their days at ACCRA, when both belonged to that powerful law firm that's more identified with another ex-Enrile protégé, Sen Edgardo Angara. In fact, the late Rene Cayetano’s youngest son, Lino, is named Lino Edgardo, adopting for his second name the first name of his godfather Ed.

The Enrile-Angara-Cayetano relationship turned sour one day. I am told this happened after Angara became president of the University of the Philippines and Enrile had asked for a favor related to his son and namesake, Jack. If the story I heard was true, it was a favor, the story goes, that Angara declined, citing his stature as president of the State University. Now, in a country where everything is personal, turning down a personal favor and citing your professional status as basis is rarely done and, when done, results in burned bridges.

Hence the birth of the Ponce Enrile Cayetano Bautista and Reyes law firm, or Pecabar.

Enrile needed a political party to buttress his position. We worked to strengthen the Nacionalista Party. At the time, Rafael “Nono” Palmares of Iloilo claimed to be the political heir of NP's Jose Roy, but the leadership was quickly taken over by the Enrile group.

Rene Cayetano became secretary general (we kept Palmares as party head), and Cayetano made me secretary-general of the youth arm, the Young Nacionalistas. I was 24 then. We would go around the country organizing. Our motto was “Harani Na” which was a southern Mindanao phrase that meant “Malapit Na.” Among the party leaders I traveled often with were Dick Gordon representing Central Luzon, Nitoy Durano of Cebu, and Nonong Garcia of Davao. 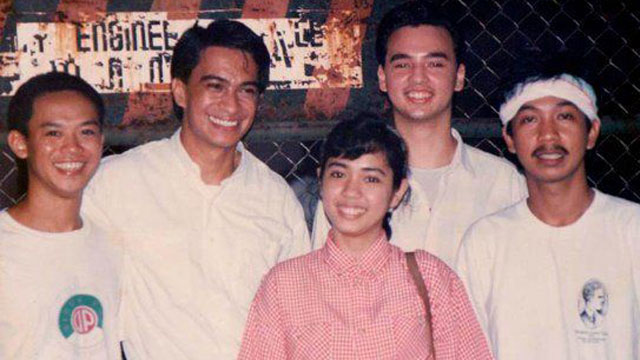 I would ride to and from that house to the Cayetano residence, with Rene Cayetano always in deep thought. A bullet proof vest would hang from the handlebar atop the door of the Benz we were riding, one covering my passenger window and the other covering his.

Then Enrile was fired as defense minister.

The Grand Alliance for Democracy (GAD) was next, hatched to become the anti-Cory coalition to contest the 1987 polls. We would meet at the offices of the Valdes accounting firm, and it was at this time when Cayetano, who had roots in San Juan, suggested drafting Mayor Joseph Estrada as a candidate for the Senate.

The 1987 elections were a debacle for GAD. Only JPE and Estrada won out of 24 seats contested, and Cayetano lost in his race for a House seat in Taguig-Pateros. At that point Cayetano told me he would have to fold his legislative office, and I said I would just return to law school full time.

'JPE was only for JPE'

In due time, however, his secretary Divine was calling, telling me that Cayetano had met Enrique Zobel at a party and that the latter was looking for an executive assistant. Cayetano wanted to introduce me to Zobel, which he did. I ended up working as Zobel's assistant and speechwriter starting in 1988. So this was the man with deep pockets and short arms!

My work with Zobel caused me to drift away from the political circles in which I used to circulate, and so, by the time 1992 was approaching, I had a different take on what kind of president we needed.

That’s when Cayetano asked me to see him. In his second floor office at Pecabar, he told me that he always respected my political instincts and would never stop me from making my own decisions, but that my decision to campaign for Danding Cojuangco had hurt him because 1) I didn’t warn him in advance and 2) it was causing some issues in his circle. JPE was planning to run for president, too.

I apologized for the first and explained myself, saying that I felt the times needed someone other than a lawyer and despite JPE’s brilliance, I said I think we need someone else. I told Cayetano that in my book, “JPE was only for JPE.” We hugged and I left. Soon enough, JPE canceled his candidacy without alerting his lieutenants who were left out in the cold. While Danding lost, another non-lawyer won.

With Fidel Ramos as president I wondered how Enrile felt; it seems that it was Ramos, not him, who became the principal beneficiary of EDSA.

And then Cayetano accepted the post of Presidential Legal Counsel under Ramos. I am sure Cayetano sought Enrile's approval for this; that approval may have been grudgingly given but I am sure it was given nonetheless. But the move wittingly or unwittingly changed the trajectory of Cayetano’s political career -- out of the “magnetic field” of Enrile and into its own path.

What happened to Cayetano when he became Ramos' presidential legal counsel is the same thing that happened to Angara when he became UP President. A bond broke between him and his erstwhile patron, allowing him to be more of his own man. But having known Cayetano from 1984 until his death 20 years later, I have never heard him badmouth Enrile privately, much less publicly. He was, in my eyes, loyal to the end, in fact in my eyes, loyal to a fault.

That’s why I say this whole episode saddens me – because I see friendships and loyalties broken just like that, with words doing the worst damage and inflicting the worst pain. As for JPE, I have always wondered whether his unquestioned brilliance has made him unable to accept that his own “protégés” could grow up and be their own men.

As a political observer however I find glee in all that is happening because we have something to talk about. And we get a peep into the inner workings of the Senate that otherwise would have been kept secret to us mere mortals!

The only risk in all of these is that not just friendships, but even reputations of institutions could unravel -- and that could be truly fatal. - Rappler.com

The author is currently an executive at a mining firm after 14 years with a beverage multinational. His interest in Philippine politics has its roots in his all-UP education and the network of political friendships that it spawned.