Why a visit to Jerusalem is a must for Catholics

Like most Filipinos, I was raised Catholic. Growing up, my childhood was studded with Sunday Masses, religion classes, and daily prayers.

My favorite book was a thick, hardbound Children’s Bible. It had colorful drawings and large text, each page telling a parable or a story about Jesus and his apostles. They were the characters I grew up with, from far off lands with foreign sounding names: Nazareth, Bethlehem, Jerusalem.

As a child, I don’t think I quite realized these places were real places, that Israel was a land that existed, that these Holy sites were a plane ride away. Over the years, as I became old enough to understand the significance of the Holy Land in the modern world, I was also becoming less religious. It was a change brought about by a lot of different things, and while I still regarded myself Catholic, practices became less rigid, my faith less sure.

Which is why it surprised me deeply, how I felt when I visited Jerusalem.

I am fortunate that my work takes me to places around the world – sometimes for conferences, mostly for coverages. And in January this year, it was to cover cyber security in Tel Aviv, Israel.

Often, when I get to travel for work, I try to squeeze in a day for sightseeing, or at least a few hours to experience the local culture. In Israel, seeing Jerusalem was not a question.

The Old City of Jerusalem is a walled city within the modern city of Jerusalem – something like Intramuros in Manila – and is enclosed by beautiful stone walls, built in 1535. Ancient Jerusalem is the only area in the world considered sacred by Jews, Christians, and Muslims, all of whom believe it holds holy sites relevant to their religions.

My tour took me to see all of the Old City, walking through its 4 quarters: the Muslim Quarter, Christian Quarter, Armenian Quarter, and Jewish Quarter. Each one was special and worth seeing, but having been raised in the Catholic faith, it is the Christian Quarter – and Bethlehem where Jesus was born – that I want to focus this article on.

It was, after all, the sites that touched me the most.

Beyond the architecture or the interiors of these places, it was their significance that overwhelmed me. To follow the path where Jesus walked, to see where he spent the final days of his life, to touch the spot he was crucified – all of it was moving and memorable.

Despite not being deeply religious, Jerusalem and the energy it exudes is unforgettable. Witnessing the faith of pilgrims from all over the world is an experience in itself. But perhaps what made the most impact on me was that being there made everything I learned growing up feel real. It made it concrete.

And because of that – of seeing the faith of others and of realizing that the Jesus I was taught about lived here and died here, on the ground I walked on, on this very place on Earth – strengthened my faith in an unexpected way.

Here are the top sites that were a must-see for me as a Catholic.

Personally, I realized the visit to the Old City would be an emotional one quite early on in the trip. As we drove around the walled city finding parking, our tour guide Remi pointed out the Church of All Nations in the distance. The Catholic church sits on the Mount of Olives, next to the Garden of Gethsemane, the site where the agony in the garden took place.

The Church is significant, in that it preserves a piece of bedrock believed to be where Jesus prayed the night before his arrest on Good Friday.

“From that spot, Jesus is said to have walked with his disciples across, here, to Jerusalem,” Remi said.

I imagined Jesus walking from the Garden of Gethsemane, trekking across the expanse between our bus and the Church, and into Jerusalem, a total walking distance of about one kilometer. It hit me hard to realize this was the path he walked all those years ago, and there I was, seeing for myself the steps he took as he headed towards what he knew would be his final day.

While my tour did not include a visit to the Church itself and to see the Garden, just seeing it from a distance was moving in itself. I would’ve loved to trace his steps from the Mount of Olives if I had more time.

2. Room of the Last Supper

Our first stop of Christian significance was the room of the Last Supper or the Cenacle. In the Bible, the site is described as an “upper room” and in Christian tradition, is believed not only to be where Jesus ate his final meal with his apostles and washed their feet, but also where the Holy Spirit appeared to the disciples after Jesus’ resurrection. 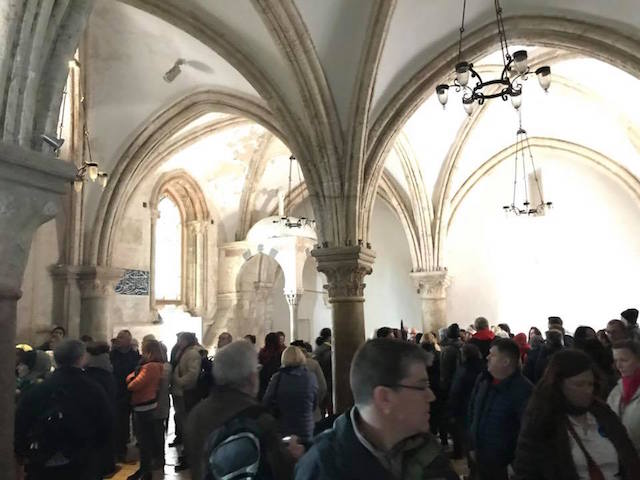 UPPER ROOM. The Room of the Last Supper is filled with columns, pillars and arches.

The room itself is empty today, but is supported by pillars and columns. But once, I imagined, this room had a table and a meal and 12 seats – an image much like the ones immortalized in religious paintings.

I asked Remi if this was the actual spot where the biblical events took place. He explained that the structure itself had been rebuilt several times over the past centuries, but that historians agreed that the actual room would’ve been around the area.

“It could’ve been at this exact spot, or a few hundred meters to the left or to the right of here. But it is agreed by scholars it was somewhere around here,” he said.

I later found out this applied generally to the other Holy sites.

3. The Basilica of Dormition

A close walk away on Mount Zion is the Basilica of the Dormition, where the Virgin Mary was believed to have died. Catholics believe when Mary died, she was taken into heaven, body and soul – hence, the name of the church which means "falling sleep." Unlike the Upper Room, this Church was a feast for the eyes in all its colorful, mosaic glory.

The main highlight for Catholics would be the statue of Mary in the Crypt. The life-size image is seen lying on her back, her eyes closed, to mark the place where she died. The statue is made of wood, including her dress. Above her is a mosaic of Jesus, with his arms wide open, to symbolize welcoming Mary to Heaven.

Catholics often kneel around her crypt and pray to Mary at this spot, which is striking in both its architecture and sacredness.

The name Via Dolorosa translates to “Way of Grief”. It is a street within ancient Jerusalem and is believed to be the route Jesus walked towards his crucifixion. The total length of the path is about 600 meters, and marks 9 of the 14 Stations of the Cross followed by Catholics.

The Stations of the Cross marked on this street include the trials by Pontius Pilate, the 3 spots where Jesus was believed to have fallen, and Jesus’ encounters with his mother, Simon of Cyrene, Veronica, and the Pious Women.

As I walked the path towards the spot of Jesus’ crucifixion, it was difficult not to imagine Jesus’ struggle as he carried the cross. Remi reminded us that during Jesus’ time, none of the current structures were there yet.

I walked down the route towards the spot where he was to be crucified, thinking of what Remi said and an imagined weight of a 300-pound cross over my shoulder. It was a sobering reminder of Jesus' final steps. 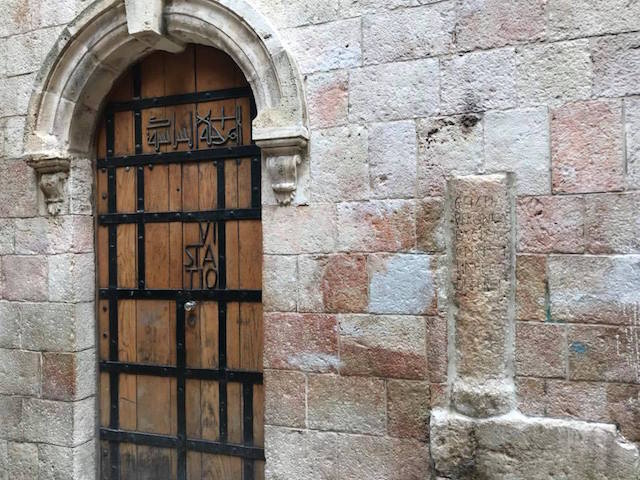 VIA DOLOROSA. The street where Jesus walked heading to his crucifixion marks 9 of the 14 Stations of the Cross.

5. The Church of the Holy Sepulchre

The Church of the Holy Sepulchre contains the most holy sites in the Christian religion: Calvary or Golgotha, where Jesus was crucified; and the tomb where Jesus was buried before he resurrected. It also has marks of the 5 final Stations of the Cross: the removal of his garments, his crucifixion, his death, the removal of his body from the cross, and the laying of his body on his tomb.

This Church was, by far, the most emotional spot in the journey. Upon entrance, a staircase on the right leads to a second floor, the hill of Jesus’ crucifixion. The spot is richly decorated in golden ornaments, and marked by an altar of Jesus on the cross. There is a long line that lets visitors wait one by one for their turn to touch the marked spot and pay their respects.

Further inside the Church, on the left, is the Aedicule – where the Holy Sepulchre is contained. The box-like structure is a stone room which marks the spot where Jesus is believed to have been buried. The line to enter may take up to an hour as well, but even seeing it from the outside is remarkable.

Surprisingly, the most stirring for me was the Stone of Anointing at the center of the Church, where Jesus’ body was believed to have been prepared for burial. There was something poignant to me about the spot that lay between Calvary and Jesus’ tomb, the spot where Jesus was laid after he was taken from the cross.

Seeing pilgrims kneeling, praying, and weeping around the stone proved painful to see – and made it all too real, a reminder of what happened in this spot hundreds of thousands of years ago. 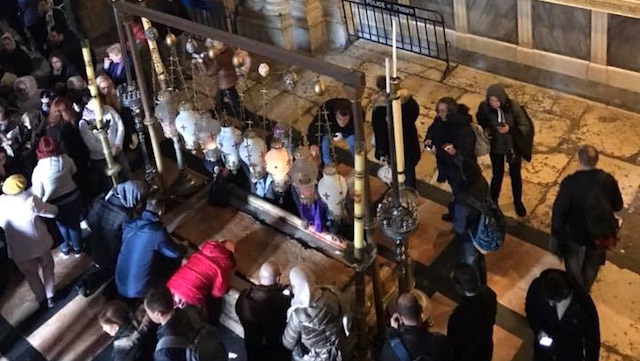 STONE OF ANOINTING. Pilgrims gather to pay their respects to the spot where Jesus was prepared for burial.

The Church of the Nativity in Bethlehem is a large and beautiful white structure, with a short and tiny door. It was built back in the day to prevent camels from entering – at least according to Remi.

The Church of course, was a stark contrast to the story of the night Jesus was born – it having been a manger – but below the Church was a spot that marked where the manger lay.

Unlike the other sites in Jerusalem, the Church gave me a lighter feeling: here was the spot Jesus was born!

It was a good place to end. – Rappler.com

Planning a trip to Jerusalem with your loved ones? Save more on your accommodation when you book at Hotel.com using our exclusive coupon codes!