Bookmarking Rizal: A Dead Tree Hero in a Digital World 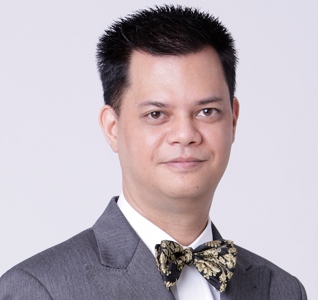 The first time I went to Malacañan Palace, in 1986, my father paused at the main staircase and told me a story his father had told him. It was a legend that seems to have been widely believed by the generation that lived through the era of the Revolution and the First Republic.

The story went that, upon hearing her son had been condemned to death, Doña Teodora Alonzo, mother of Rizal, went to the Palace and climbed the stairs on her knees, to beg Governor-General Polavieja for the life of her son.

The ritual of the climbing of the stairs, which marks the start of a new presidency, owes something to this legend.

Rizal cannot be ignored in the Palace.

At the top of the stairs, the visitor can’t help but see, to the left, Juan Luna’s painting of the Blood Compact, in which Rizal was the model for Sikatuna and Trinidad H. Pardo de Tavera, for Legazpi. And in the Reception Hall itself, where the portraits of the presidents are displayed, there is a large table which serves as a reminder to presidents that unlike foreign Governors-General, they are expected to be merciful to their countrymen.

Jose Rizal himself was no stranger to Malacañan Palace; it was there that the final decision was made to execute him; though the place played no real role in the Revolution and the First Republic.

Rizal’s particular obsession was the promotion of civic virtues –the characteristics that he believed were the only assurance “the slaves of today” would not become “the tyrants of tomorrow”-- and by all accounts, he consciously put himself forward as an exemplar of these virtues.

To his compatriots, past and present, who despair of their fellow Filipinos, the startling thing is that Filipinos then, as now (though perhaps less now than then) gravitated to the message and the messenger with what can only be described as pious intensity: both the legend of Rizal’s mother, which tells us a lot about the emotional impact of the execution, and what actually transpired, which was that Rizal’s sisters were callously turned away at the Palace gates—contribute to not just the perpetuation, but a reflection, for every generation, on an individual (Rizal), his times, and how Filipinos then viewed the events we have to memorize in school.

This challenges us to get to know the past, instead of reciting isolated facts.

Yet the reality at present is a mass of isolated facts crammed into our heads, while a small minority who have had the time and inclination to read more widely argue and re-argue increasingly sterile arguments from the 1960s. Yet surely, whether one has taken a side in those venerable arguments or not, there is much more to be done in terms of getting our fellow citizens to simply pause and reflect on Rizal and his times.

One cannot –should not-- leave Ambeth Ocampo to undertake the effort single-handedly, much as he has reaped great public acclaim for his efforts (which tells you a thing or two about how, to borrow a line from Hollywood, “if you build it, they will come” –they will, and they do).

So setting aside the battles between academics and opinion writers, there is a public to win over to viewing the past, not as a recitation of dry, isolated data, but as something that can say a thing or two about where we are; where we’ve been; and everything in between. And since not everything can be done at once, and many other people and organizations are doing their own thing, in brainstorming for Rizal Day 2012, our office felt it would be best to concentrate on Social Media.

Consider Republic Act No. 229, signed into law on June 9, 1948. The Official Gazette, which aims to make all our laws available to anyone who can go on line, has this law up on line; yet how many Filipinos know about it? And what’s more, how many know about things it requires of every citizen, and the penalties it imposes?

And so even as the Presidential Spokesperson issued a reminder (enthusiastically picked up by the media), we put forward an infographic: 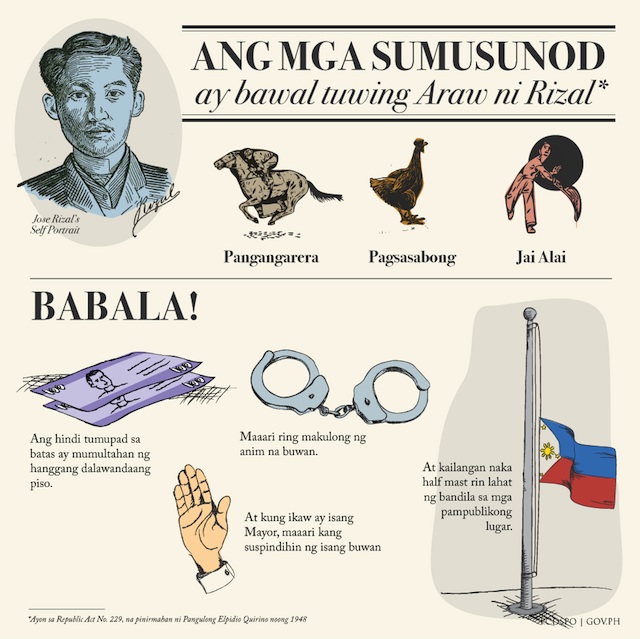 The response on line was enthusiastic, often humorous, and rather illuminating. For one thing, it seems many young people today know not the sport called Jai Alai. The other was a certain amount of disbelief about the fines involved. The anatomical correctness of the fighting cock even got a fair share of comments.

All in all, the widespread sharing of the infographic points the way forward to ways agencies can help educate the public on the law.

This year has two anniversaries focused on Rizal Day. The more recent anniversary is of the proclamation of the National Language, which took place 75 years ago on December 30, 1937.

As anniversaries go, this will most likely be overlooked except for our efforts to point it out; and yet, the current era has seen advances in the use of the national language –consider the State of the Nation addresses of 2010, 2011, and 2012, the first to be delivered entirely in Filipino.

President Benigno S. Aquino III will mark this anniversary with a video message to the nation. 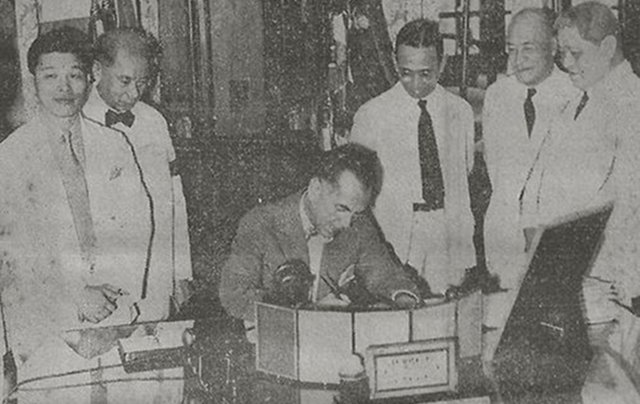 Quezon delivering his speech in the Presidential Study of Malacanu0303an Palace announcing the creation of a National Language on December 30, 1937

After all, from a communications point of view, the proclamation of the National Language also featured a first: the first radio broadcast by a president delivered in Filipino. Above is a photo by the famed news photographer Honesto Vitug of the broadcast.

The other anniversary is the centennial of the reburial of Rizal in the monument to him. There is a tremendous reenactment being undertaken by the Order of the Knights of Rizal, in cooperation with the National Historical Commission of the Philippines.

As our contribution, we felt it would be helpful to show netizens two things: the original route of the funeral cortege in 1912, on the basis of a contemporary map (in this case, one from 1922, not that far removed from the era). Among other things, a fairly contemporary map would serve as a reminder that the street names have changed in so many places. The route is marked in orange: 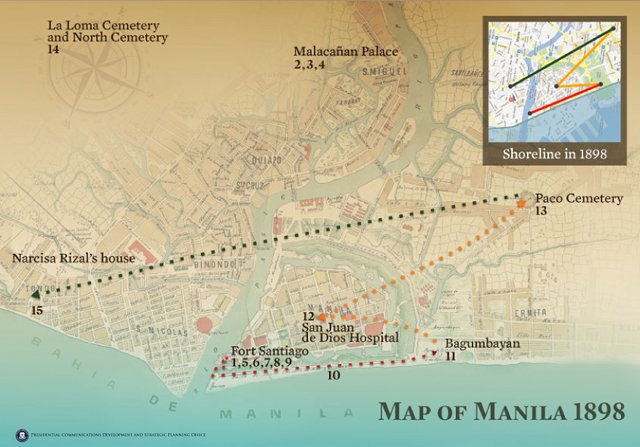 But we also felt it was necessary to add some kind of context considering not only have street names changed, but the physical landscape has changed, too. And so the map also features a smaller, inset map, that juxtaposes the Manila of a hundred years ago, with Manila today: among other things, you can immediately see how much has been reclaimed (in 1912, there had already been a major reclamation of land from Manila Bay, which is where the Manila Hotel, the Army & Navy Club, were built). Since then, even more land has been reclaimed.

The British historian Simon Schama once wrote about the “landscape of memory,” and it is something that is noticeably absent for many Filipinos: consider the effects of war, the renaming of streets, higgedly-piggedly contructed public works, and so forth. And so while the last days of Rizal all took place in places we pass by often, how those places differ today from the time of Rizal is something to consider.

And so we put forward an effort to map out the Last Days of Rizal and his Burial.

Hopefully a map like this communicates several things all at once to netizens: an idea of the physical layout of the Manila of Rizal’s era; the general location of significant events; the general route of specific events, from Rizal being brought to the execution site (in red), to the route his body was taken afterwards (orange), to the place his remains ended up after exhumation in 1898 (green).

The inset also places the 1896-98 map in the context of today’s vastly expanded Manila: were one to stand where Rizal was shot, one wouldn’t practically be standing by the bay, seeing the sea, as he did; one would be peeping, instead, into one of the guest rooms of the Manila Hotel.

In the 1960s, the British biographer of President Macapagal observed that unlike in other countries, looking at the presidential portraits in Malacañan Palace was a contemporary experience: the biographer, Geoffrey Bocca pointed out these were individuals in modern dress, and not in ruffles and powdered periwigs. But that was in the 1960s when the world was just emerging from Black & White. In today’s hyperrealistic world, and for contemporary Filipinos may find the sepia tones of yesterday not only dull, but a barrier to the imagination.

This is a challenge that has intrigued many people. Two approaches have been gaining currency. One is Adding Color to Historic Photos; the other (equally difficult in its own way) is to Superimpose Scenes from the Past on their Current Locations. Either way, serious effort is required but can, to my mind, have a tremendous impact on making the past seem less remote to the digital generation.

As a proof of concept, I think this colorized version of a photograph of Manuel L. Quezon in the uniform of a Major in the Philippine Army (when he was aide-de-camp to Gen. Aguinaldo), shows what a careful effort of this sort can achieve. Just the photograph above required finding out the colors of uniforms and equipment of the era, and a certain amount of interpreting of the data (in a black and white image, one can deduce, with some practice, how different colors are reflected in shades of grey). 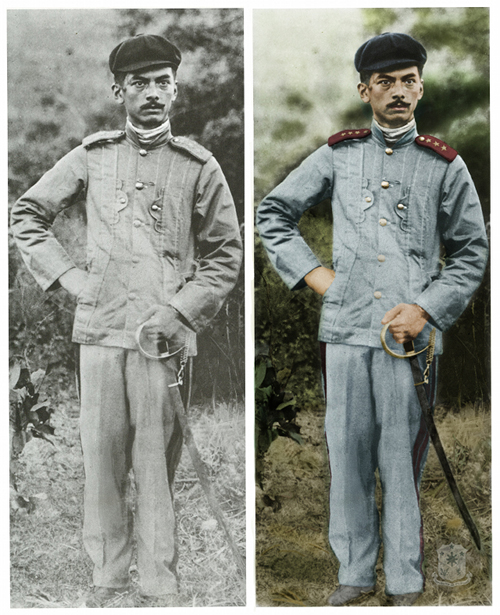 Some of our earlier experiments in this regard are already being put forward in the Presidential Museum and Library’s Tumblr and FaceBook; and for Rizal Day itself, the black and white photograph of Honesto Vitug from 1937 will be colorized –the details requiring, at one point, reference to rare color films of the room in which the photograph was taken.

In this manner, the past can produce digital artifacts, too, helping to bridge an often undiscussed digital divide: where the hard work, and even treasures, of scholars and various institutional collections, can be brought forward and introduced, to a new audience. - Rappler.com