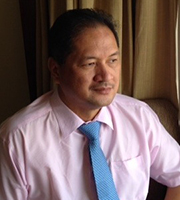 For the last 4 years, during and in between disasters, I have continually advocated the creation of a new disaster risk reduction and management agency.

Since 2009, after Typhoons Ondoy and Pepeng, it became clear to many of us in the field that, unless we created such an agency, we were bound to repeat our failures in effectively addressing disasters and their aftermath. The experience of Yolanda has once again validated this observation. And this time, it is with much urgency that I reiterate this recommendation. Even as Yolanda just happened two weeks ago, we must even now prepare for the next big disaster.

Let me be clear that I do not blame the national government or the local governments of the affected areas for our inadequate response to Yolanda. Any government, even of rich countries, would have found it very difficult, perhaps impossible, to respond effectively given its magnitude.

On the contrary, I have nothing but praise for our first responders, including top officials like Local Governments Secretary Mar Roxas, Social Welfare Secretary Dinky Soliman, Defense Secretary Voltaire Gazmin, Office of Civil Defense Executive Director Eduardo Del Rosario, and others involved in the disaster response efforts. These leaders, police personnel, soldiers, scientists, and ordinary officials have worked tirelessly for weeks now, with limited resources and stretching personal, physical, and emotional resources. They deserve nothing less than praise and support for going beyond the call of duty.

I also praise the local government officials who, while personally affected themselves and in spite of the grief that comes with knowing many of their family members and colleagues have perished, rose up within days to lead the response for their communities. It must be very difficult to function while yourself coping with the aftermath of Yolanda and enduring criticism of how you did not prepare hard enough for the storm.

I also praise the President for his generally calm and steady demeanor in managing the response to Yolanda. While he seemed to have lost his equanimity a couple of times in the last two weeks, that is understandable under the circumstances. That he resisted the call to declare martial law in Tacloban is best proof to me that this president does not panic and is always focused on the practical tasks at hand, even as his administration confronted its most serious crisis.

And finally, the Filipino people have exceeded expectations in their response to Yolanda. With unbounded generosity, they have adopted towns, provinces, families, and individuals. Many of those personally affected have shown to the world how to suffer gracefully and frequently with a sense of humor. True, in the initial days, there were reports of looting and lawlessness, but those stories were quickly outnumbered by ones of hope and resilience.

While we may very well remember Yolanda for the good moments it gave to us as a people, it is important, however, that we do not forget the lessons from this experience. The first of those is that we lost – what Maria Ressa described as the most critical period in disaster response – the first 24 hours. The President himself pointed out, as early as during his first visit to Tacloban two days after Yolanda came, that our institutional system failed as it depended on the premise that local governments would also be able to function, even immediately after a massive disaster. This premise is clearly wrong in a disaster of this nature, and it is imperative that we review these institutional failures so we can craft and implement solutions.

As a response to Typhoons Ondoy and Pepeng, Congress passed in 2010 a new disaster law – Republic Act No. 10121 (the Philippine Disaster Risk Reduction and Management Act of 2010 or DRRM Act). Among others, the new law abolished the National Disaster Coordinating Council (NDCC) and created the National Disaster Risk Reduction and Management Council (NDRRMC).

The DRRM Act continues to be a good law in that it mandated a paradigm shift from an emphasis on disaster response to that of risk reduction. Experts are unanimous in believing that the best way to prepare for a disaster is to know and to reduce disaster risks. A science-based risk assessment (using contemporary mapping methods) that is communicated effectively to decision-makers and to ordinary citizens is imperative for such preparation.

The DRRM Act is also correct in assigning the main responsibility of disasters to local governments. This is based on the principle of subsidiarity – i.e., decisions and actions, as a rule, must be made at the level most proximate to the problem or situation at hand where there is capacity. The reason for this is that it is the unit of government nearest to the problem, as in the case of disasters, which knows best what needs to be done.

From NDCC to NDRRMC

Take note however that subsidiarity is premised on capacity. That is why the DRRM Act requires capacity-building by local governments and why it created the NDRRMC. The latter is supposed to lead in capacity-building and in responding to big national disasters when the local government is unable to respond. Although it changed the name of the NDCC, the NDRRMC is, however, essentially the same animal in that it is a coordinative body lodged in the same department as the defunct NDCC, with the same secretariat in the Office of Civil Defense.

To use a biblical analogy, the NDRRMC is largely old wine in new wineskins, a change of name (and a bad one as it is difficult to remember) that misleads us into believing we now have a better system.

When the DRRM Act was being deliberated in Congress, the coalition of citizen organizations that works on disasters – DRRNet, at that time convened by the Ateneo School of Government – lobbied hard for the creation of a national disaster agency.

We proposed the creation of a single, permanent organization with the mandate, powers, and budget to oversee a singular, comprehensive, coordinated strategy for addressing natural and man-made disasters. With the leadership of then Congressmen TG Guingona and Rufino Biazon and the support of former defense secretary Gilbert Teodoro (whose experience in managing Ondoy made him realize the inadequacies of the NDCC system), we succeeded in getting the House of Representatives to include the creation of a disaster agency in its version of the DRRM Law.

Unfortunately, the Senate refused to concede this point and the bicameral conference reenacted the old system with its new, difficult-to-remember name. That is why it is only right that the Senate, as proposed by Senator Grace Poe, should lead this effort to address the failure of our current system.

An independent agency (we suggested in 2010 an authority directly under the Office of the President headed by a cabinet secretary) would have the mandate to assist and train local governments with DRRM. Such agency would be empowered, under certain circumstances and following set procedures, to preempt local government primacy for disaster response when it is likely that the expected or actual disaster is too big for particular local governments to handle.

Permanent national response teams, built on contributions of the various departments who are already members of NDRRMC, for big national disasters would have to be created and coordinated by that agency.

An independent agency can host disaster response training and exercises for disaster first-responders from other departments (e.g., armed forces and police), local governments, and citizen organizations (e.g., Red Cross). Among others, it could do scenario-based planning and lead simulations (maybe war games would be a good way to describe these) that could help identity potential bottlenecks and obstacles for a speedy response.

In Yolanda’s aftermath, the complete failure of communications and the impassable roads could have been identified, and equipment such as satellite phones and heavy-duty, all-terrain vehicles could have been prepositioned. The simulations must be based on worst-case scenarios so we are prepared, no matter how extreme the weather or disaster event. 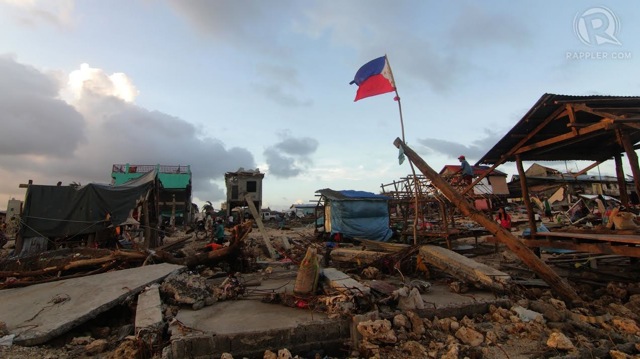 GROUND ZERO. The town of Hernani in Eastern Samar is witness to the fury of Typhoon Yolanda.

A stand-alone disaster agency will not have to compete with the bureaucratic priorities of a host bureaucracy; e.g., the Department of National Defense – or for that matter, the competing bureaucratic priorities of the other Cabinet secretaries who make up the NDRRMC. It can be given the authority to manage the national funds and budgets allocated under RA No. 10121 and international assistance to ensure effective and accountable expenditures.

It can also be responsible for setting not only standards of risk reduction that must be met by local strategies, but also ensuring compliance. In the context of regulatory processes, such as environmental impact assessments, a disaster agency could review land use plans and decisions of local governments, and make recommendations, depending on whether those plans or decisions increased or reduced disaster risks for communities.

A national disaster agency must be staffed by world-class disaster professionals, who should include experienced first responders and first-rate disaster planners with impeccable backgrounds in the natural and social sciences. It should be headed by a person with powerful political skills, strong crisis leadership skills, extensive experience managing disaster response, and high credibility.

That person, someone like Governor Joey Salceda of Albay (probably the local government with the best disaster risk reduction and climate change program in the world), must be able to work closely with local officials, have the respect of his/her peers in the Cabinet, and the complete support and trust of the president. While an enabler and capacity builder in between disasters, when a national disaster is of such magnitude as that of Yolanda, that person must know how to command and control, and become the ground commander for the president and the government.

As I have written in my Eagle Eyes columns, the only argument against an independent disaster agency is its potential cost. Such an argument, to say the least, is short-sighted. As we have seen in Yolanda and in previous disasters, a nation that isn’t willing to pay for disaster risk reduction and preparedness now will certainly pay for the disaster in lives and property.

At most, an independent national disaster agency would cost less than a billion pesos annually for its regular operations while, as history has shown, the cost of disasters to us is P10 billion to P15 billion a year. The National Statistical Coordination Board (NSCB), for example, as of January 2013, estimated about P291 billion in losses to storms and floods over the past 20 years and that figure is sure to rise with Santi, the Bohol-Cebu earthquake, and Yolanda. And this is not counting the cost of human lives and the economic value of those lives. If we really are serious about “zero casualty,” we must be ready to spend for that.

Natural calamities come to the Philippines like clockwork. That is a consequence of our geography being in the ring of fire and the typhoon belt. In that sense, disasters are beyond our control.

The real disaster lies in our response to this hard reality. We do not reduce our risks, and in fact, as we are doing with reclamations on Manila Bay, we continue to enhance our vulnerability and increase disaster risks. We also have not put in place effective institutions to respond to disasters. As a result, in big disasters we always lose the first 24 hours. This has to change. This must change. Creating an independent, stand-alone national disaster agency is a necessary step for that to happen. - Rappler.com