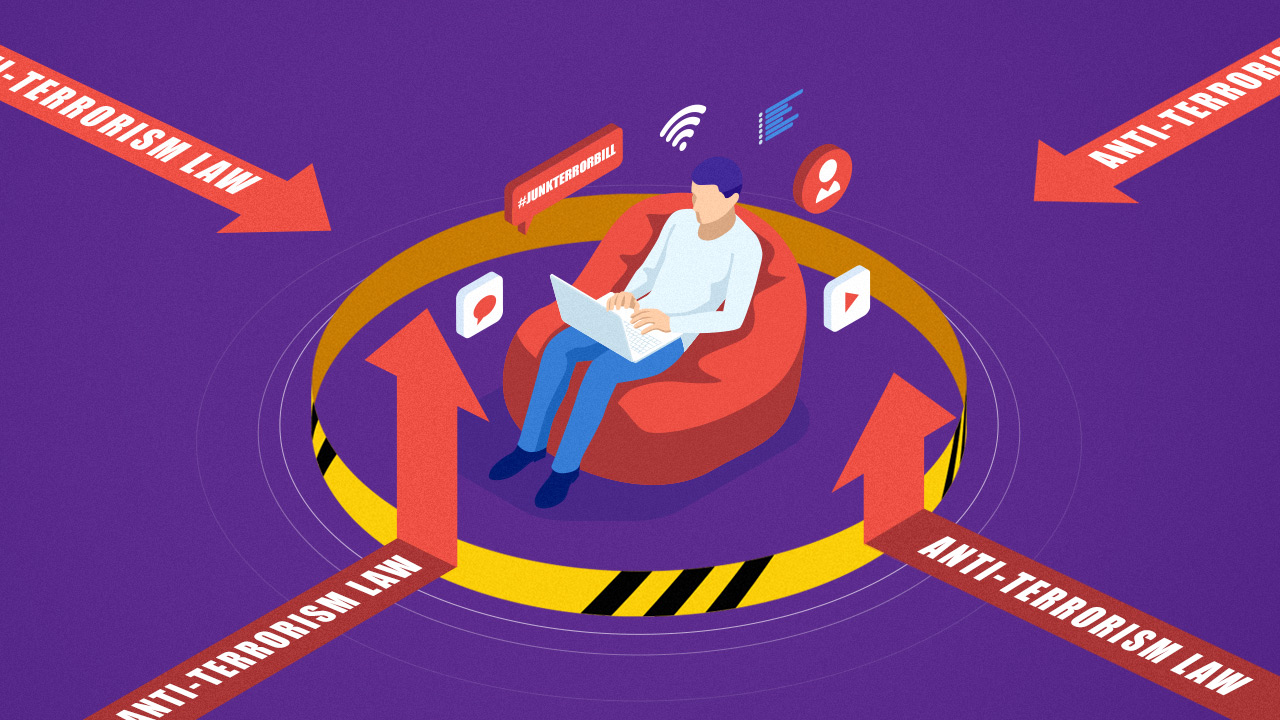 Fifteen days after its publication in the Official Gazette, the controversial and much-opposed Republic Act 11479 or the “Anti-Terrorism Act of 2020” is set to take effect. While it was framed by the administration as a measure to address terrorism and related threats, its content goes beyond the conventional understanding of “terrorism” and so pervasive that it can cover acts of dissents and legitimate free expressions otherwise guaranteed by the Constitution.

While there are firm assurances from the law’s main proponents that the law will not curtail constitutional rights or be abused, in the ground, legislative intent and actual enforcement could turn to two different animals. In fact, statements from some of the President Rodrigo Duterte’s most trusted men are revealing the real motive for its instantaneous passage while the country was (still is) scrambling to survive the pandemic. (READ: [OPINION] Martial rule without martial law: An anti-terror bill subtext)

The statement is pregnant with implications.

First, it is a cold and an unmistakable warning that people are “safer” when they stay silent.

Second, Esperon assumes that it is for him to tell which statements will be allowed or not.

It appears from Esperon’s statement that it is the Duterte government’s assumption that the Anti-Terrorism Act has not only authorized censorship, but it made them censors. That he makes that assumption reeks of constitutional ignorance, but we appreciate his candid revelation that, to the administration’s mind, the law is not just about “terrorism” but a weapon to curtail dissents, as its critics have accurately pointed out.

These dangerous statements constituting as “administrative interpretation” should be useful to those who will go to the Supreme Court to question the constitutionality of the law.

But how about Maria Ressa’s cyber libel case, one may ask? We must note that Maria’s case is unique as the judge pegged its conviction not on the date of the original publication on May 29, 2012, but on the supposed “re-publication” of the subject article on February 19, 2014, which was made after the effectivity of the Anti-Cyber Crime Law in September 2012.

However, in future posts, please be aware that the prosecution cannot be stopped from using one’s old tweets or posts to establish motive or the continuity of the thought adjudged to be criminal or as proof of premeditation.

Is making an account private an option? We have to note that the privacy of a post is not a defense in criminal suits and neither is it exculpatory or mitigating, although limiting posts to trusted friends and followers would significantly reduce the risk of getting in trouble for it. But, at the same time, this would defeat the purpose of free speech, which is to speak openly and without fear of consequence, to the end that the speech will reach more people and let it reverberate in the public sphere.

The best precaution, however, is for one to exercise maximum prudence in posting on their social media pages and to be always aware of the consequences. People should now remember that, while our constitutional guarantees remain,the “rules of engagement” are no longer the same. With this government repeatedly proving itself impervious to dissent and even social media humor, even obvious jests and jokes can easily be taken as security threats.

The simple point is that one should always be mindful that whatever public statements one makes should be defensible in court. Legitimate, truthful, and fair criticism of government actions are easily defensible, but publicly calling for the assassination of the President even in the context of a joke would be inviting a disaster. In other words, this is not the time to be stupid or reckless.

How about liking, retweeting, or sharing critical posts or commenting on them? In Disini vs. Secretary of Justice (G.R. No. 203335, February 11, 2014), the Supreme Court has characterized these actions as “essentially knee-jerk sentiments of readers who may think little or haphazardly of their response to the original posting.” The criminal mind assigned to the original author seem to have been suggested by the court to be not equal to those who just like, share, retweet, or comment on it – thus, not sharing the criminal liability of the original author. While this can be assuring for now, things can quickly change.

People also need to rethink how they can strategically and safely continue to protest and dissent given the boundaries set by the Anti-Terrorism Act. In Hong Kong, activists have resorted to wordplay, coded language, and other creative ways to voice dissent after Beijing adopted a new security law which, just like ours, has broadly banned subversion, secession, terrorism, and foreign collusion. One graffiti, for example, declares, “Arise, ye who refuse to be slaves.” This sentence is the first line of China’s national anthem, but doubles as an obvious declaration of dissent to Beijing.

If one feels the need to add layers of protection, or that increased privacy is not an option, he or she can opt for anonymity – anonymous email addresses and “alter” or anonymous social media accounts. VPN, which is available for cheap monthly rates, can also be used to mask locations and clean-up traces. And, finally, avoid popular keywords in tweets or make them less searchable to government regulators.

While it can be argued that the fear of the Anti-Terrorism Act is all speculative at this point, please be aware that, within the text of the law, the government has arrogated upon itself draconian powers that can easily be wielded to suppress free speech and internet freedom as we know it. Things can remain as they are, sure, but the cruel fact that everyone needs to know is that the extent of our right to free speech now hangs on the restraint of the government in exercising these draconian powers.

And speaking of restraint and tolerance of dissent, the record of this government is not that assuring. Thus, with the effectivity of the Anti-Terrorism Law in less than two weeks as of this posting, the public has to quickly rethink how they can strategically and safely continue to protest and dissent given this new “normal.” – Rappler.com

Emil Marañon III is an election lawyer specializing in automated election litigation and consulting. He is one of the election lawyers consulted by the camp of Vice President Leni Robredo. Marañon served in Comelec as chief of staff of retired Comelec Chairman Sixto Brillantes Jr. He graduated from the SOAS, University of London, where he studied Human Rights, Conflict, and Justice as a Chevening scholar. He is a partner at Trojillo Ansaldo and Marañon (TAM) Law Offices.