[OPINION | Newspoint] A strategy of crackdown and cover-up 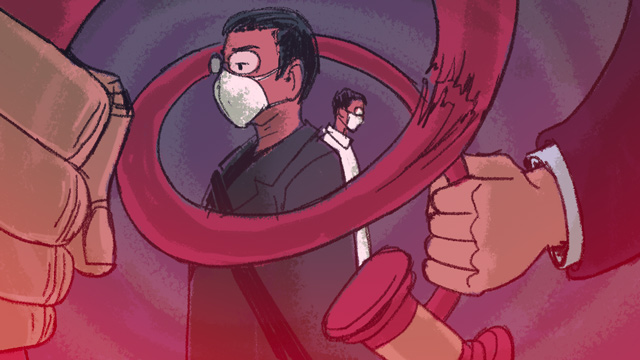 The libel conviction of Rappler CEO and Executive Editor Maria Ressa and reporter Reynaldo Santos Jr. is only the latest of recent repressive measures undertaken in quick succession by a regime led by a President predisposed to dictatorship.

These measures could not have come in the time of coronavirus by coincidence: the pandemic lays itself open to official exploitation for the fear and the hunger and joblessness and the other distractions it has brought; the government could also use some covering up for its shortcomings in dealing with the emergency — shortcomings like:

One, the all-too-predictable confusion over which community to put under what category of quarantine – GCQ, MECQ, or MGCQ – whose strictness are differentiated in degrees from each other in various aspects of life — work, school, social gatherings, travel (never mind what those initials stand for — it offers little aid to clarity); (READ: [OPINION] WNTTAA: We need to talk about acronyms, the snag in PH's virus response)

Two, the cash and food aid that has failed to reach many of its beneficiaries;

Three, the disorganization admitted by the health secretary himself and plainly evidenced by the counts of afflicted, dead, and recovered that don’t add up and are therefore constantly revised;

Four, the dismal lack of testing for infection; and

Five, the responsibility that lies with the newly retired military generals whom President Duterte, in a continuing process of militarizing the civilian government, has appointed to lead the task force against the pandemic.

Ressa’s and Santos’s conviction was preceded by two other dire events, which cannot but be related to it and each other; all 3 have happened in the last two months and targeted individuals and organizations that constitute an institutional watchdog on government.

The earliest of the 3 was the arbitrary revocation of the broadcast franchise of ABS-CBN, the country’s largest and widest-reaching network. ABS-CBN had been operating on an expired franchise through no fault of its own — Congress had been tardy in acting on the network’s request for franchise renewal. But the National Telecommunications Commission (NTC) hijacked the congressional authority over franchises and closed ABS-CBN. (READ: [OPINION | Newspoint] Martial law by any other name)

Congress could have sorted the anomaly by simply renewing the franchise, but it did not. Not only did it not reprimand NTC, it began its long-overdue hearings without allowing ABS-CBN to reopen. Moreover, it treated ABS-CBN’s application as one for a new franchise, not a mere renewal, which should be granted as a matter of course, for a denial would constitute an abridgment of the press freedom the franchisee had been exercising as a news media company.

Its scope thus expanded, the franchise inquiry gave ABS-CBN’s detractors in Congress large room for filibuster and other tricks of harassment. At the rate it’s going, it may never end. There’s no surer place for dragging out or shooting down anything as Duterte pleases — he commands a ridiculous majority there. He also happens to detest ABS-CBN so much he has publicly and repeatedly warned he would close it down.

For all its preoccupations — the pandemic, which requires it to pass measures providing for emergency outlays and ensuring accountability for them, and the slow-moving, deliberately complicated ABS-CBN case — Congress found the time to pass an anti-terrorism bill; it now awaits the President’s signature.

Evidently, the bill was intended to be railroaded past the nation’s notice, or else invitations to any proper hearings on it would have been sent out or heard about. To be sure, putting the bill together and passing it did not require serious time.

Not surprisingly, the bill leaves terrorism undefined; an Anti-Terrorism Council exclusively comprising presidential appointees is supposed to draw up the nitty-gritty of it and preside over the implementation of the law. In any case, whatever terrorism is made out to be, any person who “shall threaten to commit” it or “support” it or “incite” to it or merely “proposes to commit” it would be in trouble; he could be arrested without a warrant from a court and become a candidate for a jail term of 12 years.

At around the time the bill was passed, Ressa and Santos were convicted of charges brought to court past the period of prescription and under a law enacted after the publication of the report in question. Ressa faces 7 other suits — on tax, securities, and citizenship issues.

Once the anti-terrorism law goes into effect, she may be liable under it too. As Ressa would say, for the Duterte regime it’s all a matter of “legal acrobatics.” – Rappler.com