Seizing the moment: Preparing for Obama’s trip to Manila

The EDCA, which Manila and Washington signed in April 2014 and whose constitutionality is currently being questioned by the Philippine Supreme Court, would allow the stationing of U.S. troops, planes, and ships on Philippine bases on a rotating basis and involve significant U.S. capacity-building efforts for the Philippine armed forces.

Presidential visits have historically been action-forcing events. For Obama, this will be his last trip to the Philippines as president, and likely the last by a U.S. president for several years. The United States will hold presidential elections in November 2016, and a new president will take office in early 2017.

Therefore, Obama’s visit to Manila could be a recommitment of his rebalance to the Asia Pacific, underlining tangible support for the U.S.-Philippine alliance through serious investment in helping to modernize the defense capabilities of the Philippine armed forces through the EDCA.

With the visit less than a month away, the opportunity for the United States and the Philippines to roll out the EDCA and activate the U.S. funding vehicle—the Southeast Asia Maritime Security Initiative, which will allocate $425 million for the U.S. military to support the Philippines and other regional partners in maritime domain awareness and related military capabilities—may have passed. However, the two leaders still have the chance to institutionalize bilateral defense cooperation if the Aquino administration can see the EDCA moved out of the Philippine Supreme Court before the visit.

Many Filipinos wonder whether the United States would support them, under the framework of the U.S.-Philippines alliance, if another country attacked the Philippines. The answer to that question was clearly given in the significant efforts by both governments to negotiate the EDCA. That agreement also provides for careful respect of Philippine sovereignty and laws, as the U.S. military has no interest in re-establishing bases in the Philippines. Washington has signaled that it is committed to helping Manila develop a credible defense strategy and coordinating with other partners with vested interests in the maritime security and regional stability of the Asia-Pacific region. (READ: US to act in 'matter of hours' if PH sovereignty challenged)

If the Philippine Supreme Court can decide on the EDCA before mid-November, history can be made in Manila. Some argue that the court is attentive to political trends in the Philippines. If that is true, a reading of popular sentiment in the polls would give it every encouragement to move forward. The Supreme Court judges may also be awaiting a lower court’s verdict on the controversial case of Joseph Scott Pemberton, a U.S. Marine who was charged with the murder of Philippine transgender woman Jennifer Laude in October 2014. If the case is resolved soon, as expected, and in a way that most Filipinos see that justice is served, it will help pave the way for the Supreme Court to act. 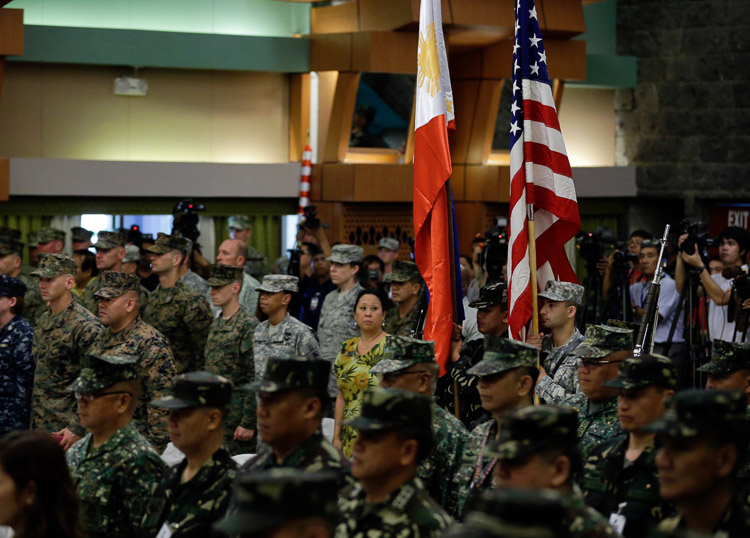 SHOULDER-TO-SHOULDER. Military troops from the Philippines and United States hold up their respective national flags during opening rites of the Philippines-US Exercise Balikatan in Quezon City on April 20 2015.

The next step for Obama and Aquino in November should be alignment on the Trans-Pacific Partnership (TPP). Aquino this month publicly called for the Philippines to join the next round of the TPP. That decision fits well within a national security strategy that recognizes that in Asia, economics is the foundation for real and enduring security.

During the APEC Leader’s Summit, Obama will convene with the other 11 heads of state from the original TPP member countries. That moment is the right time for Aquino to announce that the Philippines is committed to joining the TPP and to explain that doing so will drive economic development by having the world’s supply chains route through the Philippines, bringing the jobs, technology, and infrastructure that the country needs to continue its impressive economic growth into the next decade. In so doing, Aquino could give real momentum to efforts already under way in the Philippine Congress to amend economic provisions in the constitution that restrict foreign investments and participation in the Philippine economy. He would also signal to the other TPP countries that the Philippines is ready to join the pact.

Whether Aquino and Obama can make history and institutionalize these new levels of cooperation will depend on political leadership and strategic focus on both sides.

Some candidates running for president in the Philippines have called for closer relations with China, and underlined the need to “avoid confrontation” with China over the South China Sea disputes. Meanwhile, in the United States, some presidential candidates are running on platforms of protectionism, and recommending the country disengage internationally and build walls to limit new immigration.

Ultimately, these ideas will not win the day in Manila or Washington. But it is incumbent on Aquino and Obama to elevate the U.S.-Philippine alliance by activating the EDCA and bringing the Philippines to the top of the list of the next group of countries to join the TPP when they meet in November.

Mr. Ernest Z. Bower is a senior adviser and Sumitro Chair for Southeast Asia Studies at CSIS. Follow him on twitter @BowerCSIS. Mr. Conor Cronin is a research associate with the Sumitro Chair.

This article was first published in cogitASIA and is being republished here with the author's permission.