The myth of the moral man 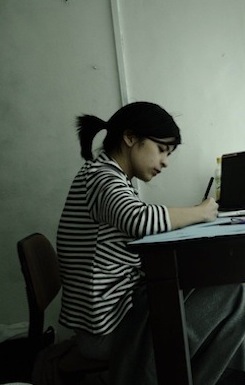 It is an easier job than most. The Chief Justice is not afraid of these men. He does not cower before flashbulbs or hide behind security. He expects the cameras, even panders to them, and calls many reporters by their first names.

Renato Corona is a media phenomenon, the first sitting Chief Justice to offer tours of his chambers and personal interviews to network producers just days after his 2010 appointment. The public knows his face, and knew it even before his pink shirts and coiffed hair began appearing on television with the first rumors of his impeachment.

In his first three days as the country’s third most powerful man, Corona racked up more media minutes than even the president-elect. He laughed with Anthony Taberna over dzMM, pointed out his graduation picture to a TV Patrol crew, talked about his wife to a red-suited Karen Davila and sat under the glare of klieg lights while speaking fondly of his darling wife.

“It’s part of the process,” he said. “The people must get to know me.”

He is the first justice to say so.

The appearance of virtue

There is a reason why the gentlemen who sit on the High Court’s bench refuse to entertain the same media Corona courted, rejecting cocktail dinners and press conferences, saying no to foreign junkets and avoiding dealings with the moneyed elite. They live within their means and isolate themselves from influence, removing themselves from the public eye not only for their own personal safety, but to protect the image of the institution of justice.

The Constitution’s demand that members of the Judiciary must be persons of proven competence, integrity, probity, and independence is not an empty statement. In a decision dismissing an erring judge from service to the bench, the High Court reminded the judiciary that the personal and official actions of every member of the Bench must be beyond reproach and above suspicion, “free of [even] a whiff of impropriety.”

Only then, said the High Court, “can the people be reassured that the wheels of justice in this country run with fairness and equity, thus creating confidence in the judicial system.”

Unlike government officials, justices are not voted in, they are appointed in a silent and highly politicized process. They are judges of men, and are thus chosen for reasons above the understanding of other men. The myth of their morality is passed on with their right to wear their robes, and maintaining that moral ascendancy is as much a duty as their hours on the bench.

In 2007, then Associate Justice Corona agreed with 13 other justices that judges are “beacon lights looked upon as the embodiments of all that is right, just and proper,” and that moral fitness is the “ultimate weapon against injustice and oppression.”

And still in 2010 Corona threw the High Court into the center of public criticism, when he accepted the position of Chief Justice in a highly irregular process. The Supreme Court’s Bersamin decision voiding Article VII, Section 15 of the Constitution allowed outgoing president Gloria Macapagal-Arroyo the right to appoint her own chief justice. The Judicial Bar Council nominated their justices for the position. Two refused, Justices Antonio Carpio and Conchita Carpio-Morales, insisting it is best for the judiciary to wait for Benigno Aquino III to select his own Chief Justice.

Justice Renato Corona accepted the nomination, the same Renato Corona who played chief of staff, spokesperson, chief presidential legal counsel, acting executive secretary and presidential chief of staff for Arroyo. If he had been willing to take his chances against Carpio and Carpio-Morales, he would have spared the judiciary the burden of being called the Arroyo court for the next six years.

It was not Corona’s appointment that endangered the judiciary, it was his acceptance of the appointment at the risk of the high court.

“Judge me in a year,” said Corona. That he did not wait one month already says much about this man who stands on a podium with his fist raised high while announcing his public love to Supreme Court employees.

“I’m sure over time, when I’ve proved myself, the public will learn to appreciate me.”

The more the public knows, the less he is appreciated. The demand that the High Court isolate itself from the public is a practical concession—there is no truly moral man, no gentleman of absolute integrity and probity and independence, thus the “appearance” of irreproachability is possible only when these men do not reveal themselves mere men.

Corona cannot maintain even that appearance. He will weep and he will wail, he will thrown insults at the presidency and conduct himself like a prancing politician, complaining about harassment one moment and indulging in petty rebuttals on national television the next. He will thumb his nose at the Senate, lie under oath and use every convenience his position could offer, including hours in emotional and illogical appeal to the judges.

His court is under assault, he says. He has forgotten that he is not the court, he is Renato Corona, candidate for impeachment. His lawyers are incorrect when they say his very position as Chief Justice makes his testimony credible, when it is that credibility that is being questioned. Niel Tupas is incorrect when he says that this impeachment “is not so much about Renato C. Corona but is more about setting aright that which is wrong.” The impeachment of Renato Corona is about Renato Corona, a judgment on the man, because to be a justice is to be judged as a man.

Corona has no right to say he should be treated like an ordinary man under ordinary rules of law. Ordinary men cannot betray the public trust, because they do not hold the public trust. Their violations of the Constitution do not compromise the public interest to the extent a judge can.

Defense lawyer Eduardo de los Angeles cannot argue that the Chief Justice should “not get less in law than anybody else” simply by virtue of his position. He is not being tried in a criminal court, he is being tried as to his fitness as the moral beacon of the Republic of the Philippines, a role he acknowledged, supported and gloried in.

The High Court, in defining a judge’s role as “a mission,” said that “a judge should freely and willingly accept restrictions on conduct that might be viewed as burdensome by the ordinary citizen.”

Judged as a man

And so when the Constitution demands that a public official declare the entirety of his assets, Corona cannot claim a loophole in the law that allows him to keep his dollar assets confidential. Nothing stops Corona from declaring his assets, as Senate President Juan Ponce Enrile pointed out, only a law that may or may not permit him to keep his assets secret. His deliberate decision to take that loophole, to deny the public the right to hold him accountable for enormous amounts of money is a not “a minor betrayal of trust.” There is nothing minor about a Chief Justice choosing to circumvent the intentions of the law for his own ends.

It leaves questions unanswered—what stops Renato Corona from admitting his wealth? What is he hiding, who is he protecting, why does it take the entire weight of a legislative act for him to reveal truths he is duty-bound to admit? It is a damning statement for defense lawyer Serafin Cuevas to say only an amendment of the law could have compelled Renato Corona to disclose his assets completely—the millions in assets he admits are undeclared.Even assuming the incredible truth of his plethora of excuses, the highest justice of the Supreme Court is expected to err on the side of duty, especially when the Constitution demands it, particularly when that duty is supposed to maintain public trust.

Renato Corona is the Chief Justice of the Republic of the Philippines, and because he is, he becomes, by virtue of robe and gavel, the most moral of moral men. He is courage. He is honor. He is integrity and probity and impartiality.

On the day he called himself Justice, he became the embodiment of all virtue. And for as long as he is Chief Justice of the Supreme Court of the Republic of the Philippines, he will remain the standard for what is considered moral.

It seems only just, in a country where popularity is power, morality is negotiable and justice depends on who wears the crown. - Rappler.com

Click the links below for more key Rappler stories related to the impeachment case against Chief Justice Renato Corona: