BANGKOK, Thailand – Prescriptions for ASEAN on its 50th year vary, but all of them require a tough reality check that will determine how capable Southeast Asia’s key regional grouping is of remaking itself – or whether it chooses to stay within the safe, familiar confines of its old habits.

ASEAN takes much pride in its centrality. Projecting political weight much more than any of its 10 member countries can individually, it basks in the limelight as the host of criss-crossing venues of discussion around security issues relevant to Southeast Asia, the larger East Asia and beyond.

“ASEAN has reached the zenith of a convening power. We call a meeting – every country would want to come,” former Thai foreign minister Surin Pitsuwan, also a former ASEAN secretary-general, told an August conference on ASEAN at 50 in Manila, organized by the Romulo Foundation.

But at 50, can ASEAN become more than the host of the party? Can it step forward to be the agenda-setter, putting in place the rules and norms of a regional order governed by international law, and thus setting the boundaries of its relationships with external powers like China and the United States – its ‘guests’?

As it is, ASEAN has to adjust to “an increasingly fluid strategic environment that is made more unpredictable by US President Donald Trump’s uncertain approach toward the region”, Tang Siew Mun, head of the Singapore-based ASEAN Studies Center, said in the ‘Contemporary Southeast Asia’ journal. “At the same time, it is caught in China’s embrace which provides ASEAN member states with economic benefits, but Beijing’s tightening stranglehold on the region can sometimes leave ASEAN gasping for air.”

He asks: “Can ASEAN member states continue to hedge their way out of this strategic conundrum?”

More of the same?

What ASEAN cannot do is to keep on doing the same thing, analysts and diplomats have said in various conferences marking this ASEAN landmark year.

“In the next 50 years, ASEAN should not adopt the usual tendency to complacency and the belief that increasing economic interdependence alone can act as the sole guarantor to security,” said Pou Sothirak of the Cambodian Institute for Cooperation and Peace.

Being the driver of the region’s security architecture and using this to smartly keep the greater powers engaged – instead of allowing it to be used as a sparring arena – is key to ASEAN’s relevance.

The questions around whether ASEAN’s past ways can work for its future stem from the radical changes – in at least four ways – that have come about in its geopolitical environment.

First, ASEAN was able to convene new mechanisms to engage greater powers owing to the political space of the 1990s, in the wake of the Cold War’s end. Many of the ASEAN-based processes in place today – the alphabet soup of acronyms such as EAS (East Asia Summit), ARF (ASEAN Regional Forum), ADMM-Plus (ASEAN Defense Ministers’ Meeting-Plus), were born then. At the time, external powers were busy with their own concerns – the United States with its war on terror, and China with growing domestically. This more benign space is no longer there.

Second, for several years now, ASEAN member states have been divided when it comes to China. China’s construction of artificial structures and military features has upset other claimants in the South China Sea and increased tensions. But its economic power has dented opposition, successfully preventing mention of the dispute in several ASEAN meetings and documents.

Third, an ascendant China has been creating its own multilateral mechanisms in trade, finance and development, such as the Asian Infrastructure Bank (AIIB) or the One Belt, One Road (OBOR) initiative. Many countries, ASEAN ones included, have signed up to them.

Fourth, the US’ less prominent role in Asia has unsettled ASEAN and the larger Asia-Pacific. If Southeast Asia’s concern in recent years was the growing contest between the Obama administration and China, this time it is the perceived vacuum that may follow in the wake of a US ‘retreat’.

This is the vacuum that many analysts say a more mature ASEAN should step into – instead of an outside power – for its own self-preservation and credibility.

Can ASEAN set the agenda in a setting where the other countries are bigger, more powerful? Can it produce the consensus to deepen institutionalization and rule-setting and respect it?

China at the center 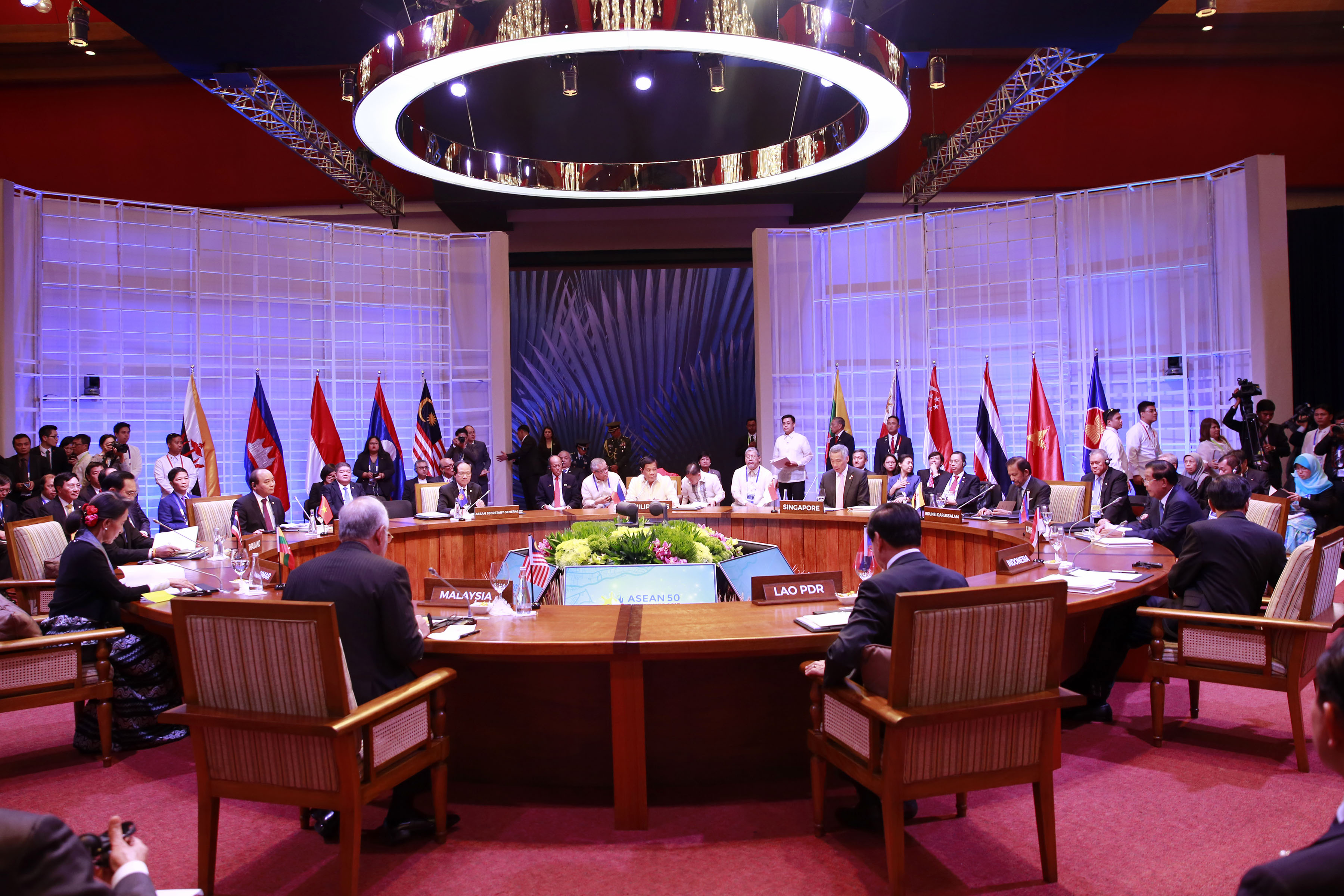 “The international environment in Asia is binding the states and peoples of South, Southeast and Northeast Asia into a more integrated strategic and economic system, with China as its centre of gravity,” Nick Bisley of Australia’s La Trobe University says in an article on the EAS in the ‘Contemporary Southeast Asia’ journal in August.

ASEAN needs to go further than its current project of community-building, Aileen Baviera of the University of the Philippines’ Asian Centre points out. “We have been focused on the areas of cooperation and we talk about the low-hanging fruit, what are the easiest things we can do with,” she said. “Community building continues to be relevant but order building is the issue that really confronts us all. “

“While community-building is about cooperation, order building should be about rules. It should be about power relations – big powers, middle powers and smaller powers together,” explained.

“If countries do not want to have to make a choice between the great powers, you know the US or China, the middle powers are also starting to think about what is their role, what more active contribution, what responsibilities do they have as well, to ensure a peaceful order remains, given their role in geo-strategic competition and the uncertainties that surround us all,” Baviera added. “It is in the same spirit that ASEAN should ask itself ‘what role do we play’.”

Although China’s assertiveness has been getting more attention since the Philippines won a 2016 ruling against Beijing’s activities in the South China Sea from the Permanent Court of Arbitration, the country had for years been pushing to limit public mention of the South China Sea disputes in various international venues.

“Since around 2009, with China’s rising assertiveness and the US ‘pivot’ or rebalance to Asia, the region’s institutions have threatened to become areas for Great Power sparring,” recounted See Seng Tan of the S Rajaratnam School of International Studies in the same ‘Contemporary Southeast Asia’ issue.

Such occurred in the ARF in 2010 and 2014 over China’s island reclamation in the Spratlys, and in 2015 at the ADMM-Plus meeting.

Compared to the 27-member ARF that has focused on confidence-building since its creation in 1994, there has been more optimism about the 18-nation ADMM-Plus. It is the highest-level consultative and cooperative forum in ASEAN that holds coordinated military exercises. But two years ago, plans for a joint statement citing the South China Sea had to be abandoned due to differences among ADMM-Plus members.

These do not give too much confidence in the current ASEAN-hosted security venues as effective balancing factors in the region.

China’s success in keeping the South China Sea disputes out of ASEAN statements is well-known, starting with ASEAN’s failure to issue a joint communiqué at the 2012 meetings chaired by China’s ally, Cambodia.

In the August 2017 meetings in Manila, the ASEAN foreign ministers’ communiqué did call for “non-militarisation and self-restraint in the conduct of all activities by claimants and all other states” in the South China Sea after strong lobbying by Vietnam. But it only cited “the concerns expressed by some ministers” on China’s land reclamation there.

Subsequently, the foreign secretary of the Philippines, China’s newest ally, openly said that his country did not want those phrases in the text.

As for Cambodia-China ties, Terence Chong of the ISEAS-Yusof Ishak Institute said that that neither of these countries “bothers with the charade any more”. In Singapore’s ‘Today’ newspaper, he quoted a Chinese scholar thus: “Today, when debating the South China Sea issue in ASEAN meetings, Cambodian officials and scholars are widely considered as representatives of the national interests of China, though they mostly reiterate previous ASEAN statements on the South China Sea.”

He adds that Cambodia is unimpressed by ASEAN’s ability to do much in the South China Sea as it could not handle the Khmer-Thai row over the Preah Vihear temple.

ASEAN, in short, has a good amount of repair work to do on its credibility.

The view from China is, of course, very different. “China is not only an East Asian country. Located in the center of Asia, that means (it) needs to organize to the east, north, west and south,” Xue Li of the Institute of World Economics and Politics at the Chinese Academy of Social Sciences told the Manila conference.

“It is hard to imagine that China will make the situation in the South China Sea out of control, or fall into conflict,” he said. “The most important thing for China is learn how to make its policy more acceptable, attractive for the surrounding countries, which is more important than (to) show muscle as an emerging power.” – Rappler.com

Johanna Son, based in Bangkok, has been following regional issues for more two than two decades. She is the manager/editor of the Reporting ASEAN (www.aseannews.net) media program.