JAKARTA, Indonesia— Indonesia has announced that it is preparing to hold its second batch of executions this year, which could include Filipino citizen Mary Jane Fiesta Veloso, a 30-year-old mother of two sentenced to death in 2010 for attempting to smuggle in 2.6 kilograms of heroin.

Despite last-minute legal efforts and pleadings from both President Benigno Aquino III and Vice President Jejomar Binay, Indonesia has not shown signs it would back down from its decision to proceed with the executions.

Lawyers are still hoping a second case review request can be filed on Monday, April 27, which could give Veloso a stay of execution.

But if it proceeds for the rest, how will it be done?

Convicts will only be informed of their execution date 72 hours before it happens.

Based on how the last execution was carried out on January 18, 2015, it will take place just after midnight on the scheduled date. 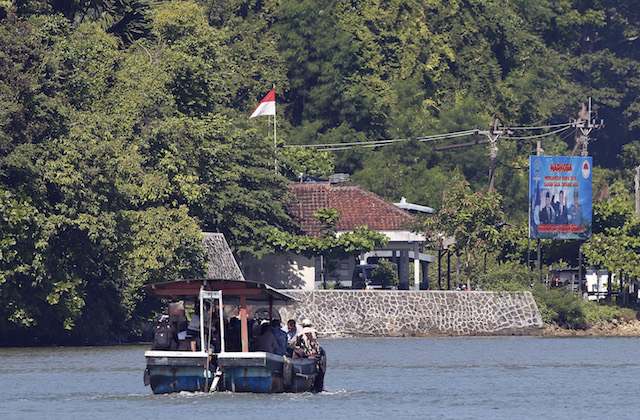 EXECUTION ISLAND. A ferry boat carrying the families of Australian death-row prisoners Myuran Sukumaran and Andrew Chan crosses the water for a visit to Nusakambangan prison island at Wijayapura port in Cilacap, Central Java, in March 2015.

The upcoming executions of 10 convicts will all be held simultaneously at the Nusakambangan prison island in Cilacap, Central Java. Two Australian drug convicts on death row, Myuran Sukumaran and Andrew Chan, have been there since March. Veloso was the last to be transferred on Friday, April 24.

The law states that convicts should be transferred to the location with a "sufficient security entourage." But Indonesia has been criticized for going overboard with this, particularly in the case of the Australian “Bali Nine” pair.

The Australian government said it was dismayed at the level of security used to transport their nationals from Bali to Nusakambangan, with dozens of armed police on hand. They were also outraged that photographs emerged from on board the plane, including one that showed a smiling police officer apparently posing for a selfie with one of the convicts. (READ: Australia protests Indonesia's treatment of Bali Nine pair)

Attorney General's Office spokesperson Tony Spontana said that was the standard procedure and cannot be avoided, even for transferring someone non-threatening like Veloso.

Who will be there?

Executions will not be held in public, unless the president says otherwise. The convict’s lawyer is allowed to attend the executions. They can also ask for a religious leader to accompany them.

But they're not always followed. Brazilian Marco Archer Cardoso Moreira, a convict executed on Jan. 18, 2015, was denied his right of religious consolation, The Sydney Morning Herald reported.

"He had to be dragged from his cell crying and saying 'help me'," Father Burrows, his spiritual advisor, was quoted as saying. "He actually excremented in his trousers." The priest was supposed to console him and give religious appeasement, but there was a mix-up and Burrows was not allowed on the island.

A team of 13 executioners is assigned to each convict: 12 shooters and one commander. These are officers from the police mobile brigade (Brimob) who are paid less than $100 on top of their existing salary to carry out their grim task.

In an interview with The Guardian, an officer who was part of one firing squad said he wouldn't be able to erase the experience from his mind. He said pulling the trigger was actually the easiest part; the worst part is the human touch with those who were close to their death.

“The mental burden is heavier for the officers that are responsible for handling the prisoners rather than shooting them,” he says. “Because those officers are involved in picking them up, and tying their hands together, until they are gone.”

How will it be done?

The law states that the convict should dress modestly. Their eyes will be covered when they arrive at the location.

They can choose to stand, sit, or kneel during the execution. In special cases, prosecutors can order the convict’s hands and legs to be tied to a pole.

The firing squad will be positioned 5-10 meters from the convict. Among the 12 shooters, only 3 will have live bullets.

The prosecutor is in charge of stating when the execution should begin. The commander will then give the go signal to his team.

And then all 12 will shoot, aiming for the heart.

A doctor will approach the body of the convict and check for a pulse. If the convict is still not dead, the commander will have one officer shoot again, this time to the convict’s head, right above the ear. 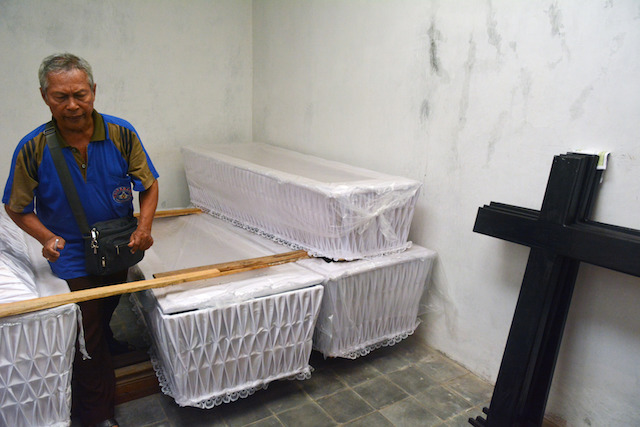 The coffins were reportedly already prepared for the next batch of executions. A Christian church near Cilacap is also ready to look after the bodies after the execution is carried out, 9news.com.au reported.

The burial process will be left to the convict’s relatives, unless there’s a special order from the prosecutor. The state will take care of the burial should there be no relatives, and it will be conducted with respect to his/her religion. – Rappler.com