Will Indonesia’s anti-graft agency ever get its mojo back?

JAKARTA, Indonesia – This week, the former head of the state-owned power company (PLN), Dahlan Iskan, was grilled for two days as a suspect in an alleged case of corruption in the procurement of 21 electricity transformers, and as a witness in an alleged graft case surrounding the purchase of 16 electric cars.

That a high-ranking former government official has been named a graft suspect is not new in Indonesia – the once powerful Corruption Eradication Commission (KPK) has jailed many powerful figures over the past few years – but that the Attorney General’s Office (AGO) and Jakarta High Prosecutor's Office are the ones doing the high-profile graft-busting is relatively unusual.

Since the highly politicized conflict between the KPK and the National Police at the start of the year, the anti-graft agency appears to have been substantially tamed. The KPK hasn’t named any high-profile suspects since, and controversial cases, like the Bank Indonesia liquidity support case that could implicate former President Megawati Sukarnoputri, have put put on the backburner.

Will the KPK, arguably the most trusted institution in the country, regain its former glory? Given the current state of politics and revived plans to revise the law giving the agency its wide powers, anti-graft activists aren’t optimistic.

How KPK lost its mojo

To recap, the KPK’s troubles began in January when it named President Joko “Jokowi” Widodo’s police chief nominee, Budi Gunawan, a suspect. The police general managed to successfully mount a pre-trial challenge that nullified his suspect status, while his allies in the National Police filed petty criminal cases against KPK leaders.

The standoff ended in February with Jokowi suspending two KPK leaders and nominating a different police chief, Badrodin Haiti. But Budi didn’t go home empty handed. He was quickly appointed deputy police chief and his corruption case was handed over to the AGO and the National Police, where it met a quiet but expected end.

Meanwhile, the suspended KPK chief, Abraham Samad, was replaced by Taufiqurrahman Ruki, a former police official who had an uneventful stint as KPK chairman from 2003-2007. In an interview with Rappler, the temporary KPK commissioner said he was out “to put out fires”, and it seems that meant shelving controversial cases that would cross the wrong people.

But anti-corruption activists are worried that beyond just temporarily taming the KPK, plans to cripple its powers by revising the law that created it will finally be carried out. 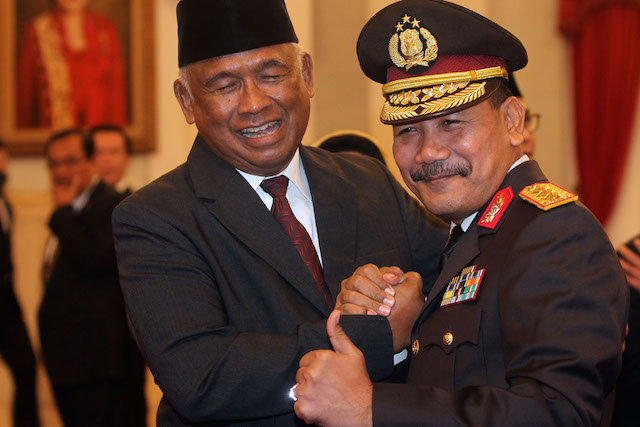 One of the reasons the KPK has been so effective at its job is its authority to wiretap anyone. This has led to many red-handed arrests and incriminating taped conversations played out in court. (READ: Like Indonesia, can PH make corrupt rot in jail?)

Lawmakers have long been trying to get rid of this special power, and on Tuesday, June 16, Justice Minister Yasonna Laoly told a legislative hearing he believes KPK should be required to secure a court order for wiretaps.

"The right to wiretap is reserved to those who have been processed by the law, so that it wouldn't violate any human rights," he said, adding that these revisions to the 2002 KPK Law are part of the legislature's priority bills this year.

But with corruption in the justice system also rampant, this is an obvious cause of concern.

Another change lawmakers want is on the ability to drop a KPK case. The current law does not allow a KPK investigation to be stopped, which means the agency only names a person as suspect when it already has at least two extremely strong pieces of evidence. This has also led to KPK’s 100% conviction rate.

But now even Ruki supports changing this. “Give permission to terminate a KPK investigation in order to keep in check potential violations committed by KPK leaders," the temporary KPK commissioner said.

The problem with this, according to Indonesian Corruption Watch researcher Emerson Yunto, is the potential for abuse. “There is a high possibility that this will be used by certain parties to stop investigations,” he said.

Emerson added that there’s also talk of reducing the cases KPK can handle. Currently, the agency can only handle corruption cases where state loss exceeds IDR1 billion (about $75,000), but Emerson said there’s talk of increasing this to IDR5 billion.

Meanwhile, both the National Police and the AGO have gone after controversial individuals and cases that have been described as "suspicious".

In the case of Dahlan's malfunctioning transformers, observers are saying the media mogul worth about $370 million did not benefit from the IDR33 billion ($2.5 million) that was allegedly lost by the state. If any, he admitted he erred in bypassing laws to get around Indonesia’s notorious bureaucracy and get the project off the ground quickly.

But if that case doesn't stick, the AGO and police have other cases they can try to pin him down with. Aside from the failed electric car project – most of the purchased cars were not delivered in time for the 2013 APEC Summit, which it was intended for, but instead just donated to state universities – police are also looking into a fictitious farmland project in West Kalimantan.

Then in March, the National Police named former deputy justice and human rights minister Denny Indrayana a suspect in a graft case related to the ministry’s online passport payment system. Denny, who allegedly abused his power when he directly appointed two online service providers to run a passport payment system that allegedly cost the state IDR32 billion ($2.4 million) in losses, claims the police’s cases against him are motivated by revenge because of his vocal support for the KPK.

There is more public support for Dahlan than Denny, but talk is rife among political circles that it appears Yudhoyono’s men or anyone who went up against the police are being targeted.

In May, police also arrested senior KPK investigator Novel Baswedan for an 11-year-old shooting case, in what many see as retaliation for KPK naming Budi a suspect. This is on top of the ongoing criminal cases against suspended KPK commissioners Abraham Samad and Bambang Widjojanto, which are similarly based on old or petty complaints.

“They’re naming as suspects the people who support anti-corruption and the KPK. This is abnormal,” Emerson said.

Who will save KPK?

The KPK isn’t new to rifts with other law enforcement institutions. Previous KPK commissioners have also had criminal cases filed against them by the police, and lawmakers always seem to be reviewing the law that created the anti-graft body and gave it super powers.

From the time it was created in 2002, the KPK now appears to be at its weakest.

Ruki and the rest of the current commissioners will end their terms in December, but the ongoing search for their replacements hasn’t attracted interesting figures yet. So far, more than 100 people have applied for the 5 posts, or expressed interest in applying, including 5 active and retired police officers, 5 prosecutors from the AGO, and a retired military general.

A 9-member, all-women selection committee created by Jokowi will draft a shortlist of 8 names, which will be submitted to the president on August 31, 2015. If the president approves, the names will be forwarded to the House of Representatives for through due diligence and fit and proper tests.

But if you ask Emerson if, at the end of this, he sees any hope that the KPK will get stronger, the answer is a quick no. – Rappler.com