Indonesian election too close to call 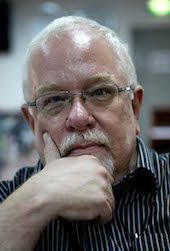 “It is anyone’s race,” said the pollster, who works for one of Jakarta’s best-regarded opinion research companies. “Jokowi is still narrowly ahead, three or four points. If Prabowo’s momentum has not peaked, he could very well win on July 9.”

The pollster, who asked not to be named, said his company, which has not yet published the results of its latest poll, is puzzled over why Jakarta Governor Joko “Jokowi” Widodo’s once seemingly insurmountable lead in public opinion polls for president over retired Gen. Prabowo Subianto has nearly evaporated. The governor was ahead by 15-20 points in most polls just three months ago, now almost every poll gives him at best a narrow lead. (READ: The Indonesian election: Now a real horse race?)

With few policy differences at stake, Jokowi would seem to be the candidate of the future. He is entirely a creation of the post-1998 democratic reform era. He has an outstanding record of elected public service since giving up his furniture export business to become a two-term mayor of the East Java city of Solo and then governor of Jakarta since 2012. No scandal has attached to his name, which in itself is unusual in Indonesia, and his approachable and humble style has had a broad appeal to voters.

Indeed if there is a true populist in the race, it would be Jokowi. He is from humble origins, he succeeded in small business and he flourished as a new type of leader after strongman President Suharto was forced out of office in 1998.

By contrast, Prabowo, who is running as a fierce populist, is a member of the country’s hereditary oligarchy whose father and grandfather were both wealthy bankers with important positions in the early decades of the republic. He was educated abroad and told by his family that he had a duty to rule the country. His path through the military was made easier by once being married to Suharto’s daughter. He has been angling for the top office at least since his days in the military academy; his brother, successful businessman Hashim Djojohadikusumo, has been right there beside him, helping to finance the family’s drive for power.

Prabowo would thus seem to be the candidate of the past. He has been accused of numerous human rights abuses from his time in uniform and his role in the murky events leading to Suharto’s downfall, including deadly anti-Chinese rioting in 1998, has never been fully explained. When he lost out in an internal power struggle in 1998, he was dismissed from the service.

But Prabowo has run a colorful, bombastic and well-funded campaign that has painted him as a strong and competent figure while a Jokowi has been made to seem inexperienced and worse. The charges, true or not, are having an impact.

Prabowo rails against “oligarchs,” presumably excluding himself, who rob from the people and foreign investors who take advantage of Indonesians. He calls for nonspecific changes that can only come about with his leadership. “The Indonesian elite has lied for too long… lied to the people, lied to the nation, lied to itself!” he shouted in a May Day speech this year. “All are corrupted! All are bribed! All our leaders are willing to be bought and willing to be bribed!”

The irony of this is not lost on observers who see Prabowo surrounded by oligarchs like Golkar Party chairman and coal tycoon Aburizal Bakrie and vice presidential running mate Hatta Rajasa, a veteran insider long familiar with making deals in the corridors of power. These are not change agents.

Prabowo also has hammered away at Jokowi’s supposed lack of experience, even though the governor has held elective office since 2005 and run cities, while Prabowo has never been elected to anything. He also says Jokowi will be a tool of unspecified foreign interests and a “puppet” of former President Megawati Sukarnoputri, who chairs his Indonesian Democratic Party of Struggle (PDI-P). A tabloid newspaper was  even started anonymously – and circulated widely in Muslim boarding schools ‑ with no apparent aim other than to smear Jokowi with outright lies that he is not really Muslim and is in reality half-Chinese.

In contrast, PDI-P was slow out of the blocks and waited months before endorsing Jokowi. The party has run a haphazard campaign, say insiders, with poor organization.  “All of this is taking a toll on Jokowi,” said the pollster. “He remains personally popular but the doubts and black propaganda have eaten into his lead. The remaining 10 percent of undecided voters will decide the race.”

The Prabowo surge, however, is disquieting on a deeper level because he appeals to the authoritarian past at a time when democracy would seem to be firmly entrenched in Indonesia.

In contrast, Jokowi talks of listening to people and finding practical solutions. He is, by temperament, a mayor who has seen that he can get things done by explaining policies, knocking heads in the bureaucracy and getting the people on his side. This is nothing if not the style of a grass roots democrat.

Prabowo is something else entirely. He rode into a major rally astride a glistening horse, for example, looking for all the world like a Latino despot; he sputters and fumes on the podium and dresses in a manner that recalls founding President Sukarno. He sometimes seems to become apoplectic onstage at the idea that anyone could oppose him. He is selling the Indonesian people the notion that he is the one forceful leader who can guide the country away from a looming abyss.

The choice on July 9, therefore, is increasingly stark, but it is one of style and demeanor rather than policy or program. Jokowi is the modern mayor who gets things done within the cumbersome and sometimes frustrating democratic system. Prabowo is the tough guy from a different time who will bend the nation to his will.

It is sobering to some that the old guard has gained substantial traction in a race that may one day be looked back on as a referendum on the democratic era. - Rappler.com