Prime Minister Tony Abbott said he didn't threaten Indonesia over the fate of two Australians on death row when he reminded Indonesia of how Australia helped in the aftermath of the 2004 tsunami and urged Indonesia to reciprocate in Australia's time of need. The comments were coolly received in Jakarta, with the Foreign Ministry warning that "threats are not part of diplomatic language". But Abbott said he was just pointing out the strength and the depth of the relationship between the two countries. Read the full story on Rappler. 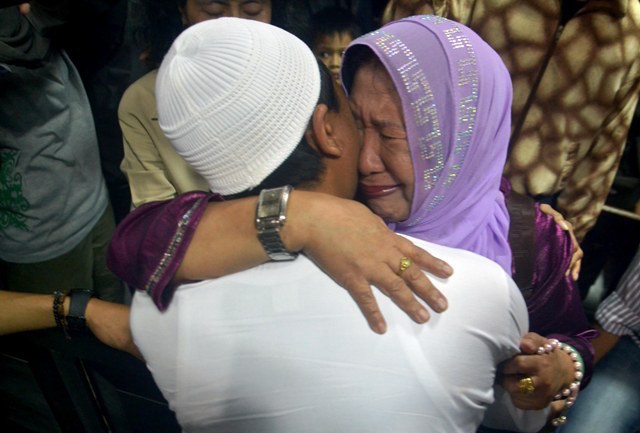 Fadhli Rahim, a 33-year-old civil servant in Gowa, Makassar, was sentenced to 8 months jail on Wednesday after being found guilty of online defamation for comments he made against Gowa district head Ichsan Yasin Limpo in a group chat with high school classmates on the messaging platform LINE. Fadhli wrote that he heard from investors that deals were not pushing through because of cuts demanded by the district head, but unfortunately one of the members of the chat group reported him to Ichsan. Fadhli is the latest Indonesian to be jailed under the controversial 2008 Electronic Information and Transactions (ITE) Law, which criminalizes online defamation and imposes a maximum penalty of up to 6 years in jail and a fine of not more than IDR1 billion ($82,000). Read the full story in Bahasa Indonesia on Rappler.

3. Indonesian sports committee refuses to budge on Olympic ring use

The Olympic rings seen at the Olympic Stadium in Berlin, Germany, in February 2015.

“In Jakarta, (Go-Jek) is very helpful. That’s why we must integrate so commuters can commute with Go-Jek from home to the TransJakarta bus stop. And then take the TransJakarta bus to their workplaces,” Ahok said after meeting Go-Jek’s board of directors at the City Hall on Wednesday.

He envisioned that the separate entities can create a joint smartphone app to further ease Jakartans’ public transport woes.

“I think this is a good method. This can increase ojek drivers’ income,” Ahok added.

Go-Jek CEO Nadiem Kariem said that Jakartans can download Go-Jek’s app on their smartphones via Playstore and Apple Store. Read more on BeritaJakarta.com

5. Dangdut singer under fire for insensitive remarks on Papua

Rising dangdut singer Cita Citata on Wednesday apologized for her insensitive remarks towards the Papuan community. While wearing a traditional Papuan attire backstage at an infotainment show, she told a TV station interviewing her: "I still have to touch up my face to be pretty. I don’t look like a Papuan, do I?” Former Papua Governor John Gluba Gebze said her remark was an insult to Papuans. On Wednesday, she visited the House of Representatives (DPR) and apologized to Papuan lawmakers. “I extend my deepest apology to the Papuan family and the representatives in DPR. I hope they will accept my apology," she said as quoted by BeritaSatu.—Rappler.com