China's new leader: Who is Xi? 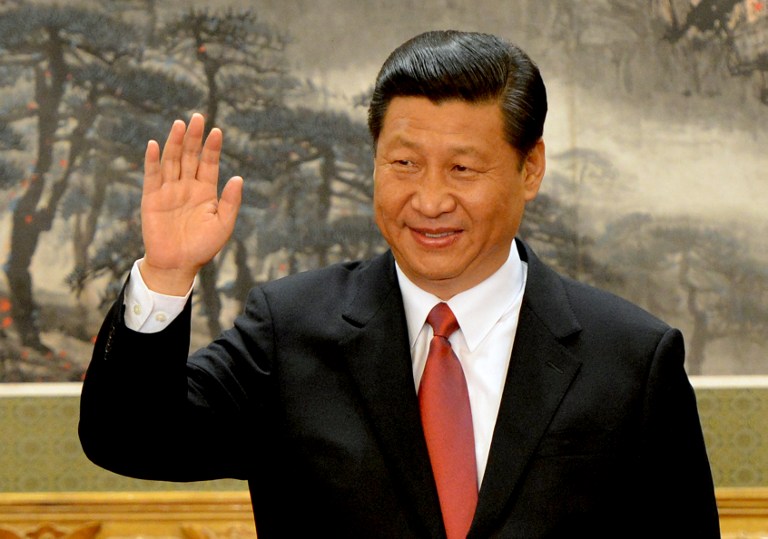 XI IS IT. Chinese Vice president Xi Jinping emerges as the head of the newly reshuffled seven member Communist Party of China Politburo Standing Committee, the nation's top decision making body at the Great Hall of the People in Beijing on November 15, 2012.

BEIJING, China - With a revolutionary hero for a father and a pop star for a wife, China's new leader Xi Jinping has impeccable political pedigree but has given few clues about how he will govern the country.

Xi, 59, walked into the Great Hall of the People in Beijing Thursday as general-secretary of the Chinese Communist Party, the most powerful position in the world's most populous country and second-biggest economy.

He is expected to become national president in March and hold both posts for the next decade.

He has risen to the top of the secretive party by presenting himself as a compromise candidate -- acceptable to outgoing leader Hu Jintao, still-influential former president Jiang Zemin, and other power-brokers.

But since he has largely kept his policy leanings to himself, how he will address China's challenges remains unclear -- even though he takes over at an uncertain time, with growth slowing as public expectations and scrutiny rise.

Xi has avoided revealing any leanings that might threaten his status as a consensus candidate, backing non-controversial policies and positions during his rise up the party ranks, said China political analyst Willy Lam.

"He's a team player. He played by the rules of the party. He's not a risk-taker. He doesn't want to take risks that might jeopardize his career."

Whatever his beliefs, few expect Xi to stray far from the Communist template of gradually opening the economy while maintaining tight political controls, especially as he will need to first consolidate power, a slow process faced by all incoming Chinese leaders.

Nonetheless he is seen as a cautious and skilflul politician, able to navigate the factional divides of the party hierarchy.

As the son of the late Xi Zhongxun, a respected Communist elder, he is part of the "princeling" generation -- the privileged offspring of hallowed figures who played key roles in the revolution that brought the party to power in 1949.

Despite this pedigree, Xi Jinping was "sent down" to the Chinese countryside to live and work alongside peasants, as were many young educated Chinese during Mao Zedong's 1966-76 Cultural Revolution.

His father fought alongside Mao and served as vice-premier until he fell in one of Mao's political purges, then was rehabilitated under pragmatic former top leader Deng Xiaoping.

While laboring in the poor northern province of Shaanxi, Xi joined the Communist Party and in 1975 moved to Beijing to study at the prestigious Tsinghua University.

He oversaw some of China's most economically dynamic and reform-minded areas, the eastern provinces of Fujian and Zhejiang, before briefly taking the top post in the commercial hub of Shanghai in 2007 -- earning a reputation as a supporter of economic reforms and an effective manager.

He created a stir during a 2009 speech in Mexico by scoffing at "foreigners with full bellies and nothing to do but criticize our affairs" -- many Chinese harbor resentment against the West -- but he has unusually deep US links for a Chinese leader.

As part of a research trip in 1985 he spent time in Muscatine, Iowa, deep in the Midwest, and paid his host family a return visit in February while on an official visit to the United States, where his daughter is a student at Harvard.

A reputed basketball fan, Xi also took in an NBA game, while a diplomatic cable released on whistle-blower site WikiLeaks recounted a 2007 conversation between Clark Randt, the then US ambassador to China, and Xi that revealed the future president as a big fan of US World War II films.

The cables described Xi as pragmatic yet ambitious, willing to tilt with the political winds to get ahead.

They said he was uncorrupted by money yet with a sense of political entitlement, feeling that fellow "princelings" like him "deserve to rule China".

His extended family have business interests worth hundreds of millions of dollars, according to an investigation by the Bloomberg news agency earlier this year, which said there was no indication of wrongdoing on his or their part.

Xi's public persona is given a sprinkle of glamor by his wife Peng Liyuan, who holds the rank of army general and sings songs praising the party.

Some analysts suggest Xi's status as a consensus figure could mean less paralysis between factions than under Hu, who heads a group of leaders who moved up through the Communist Youth League.

But the curtain drawn across the party and its leaders makes that impossible to predict, said Patrick Chovanec, a Tsinghua University professor.

"It would have been counterproductive for (Xi) when he was still relatively junior to show himself. The reason he has got ahead is because he is a follower and has not struck out and done something that is radically different," he said. - Neil Connor, Agence France-Presse