MANILA, Philippines – #JeSuisCharlie (#IAmCharlie). Journalists stood in solidarity with the sentiment behind the hashtag that reflected the global response to the terror attack on the French satirical magazine Charlie Hebdo. The assault particularly hit a nerve for media workers, whose profession relies on the fundamental right to free speech.

Yet news organizations soon drew flak as several major media outlets decided to self-censor Charlie Hebdo’s cartoons of the Prophet Muhammad. To some media critics, it was a decision that betrayed the very principle their colleagues died for.

Big names in global media including the New York Times, CNN, The Associated Press (AP), ABC News and CBS news decided not to show the original images by cropping or pixelating photos, choosing to show “less controversial” cartoons, or using a wide shot of protests instead of focusing on the cartoons.

Media groups defended their choices, citing editorial policies they also observed in the wake of the controversy over a Danish newspaper’s Muhammad cartoons in 2005.

In an internal memo, CNN senior editorial director Richard Griffiths said that the issue touched on the classic debate between free speech and respecting religion.

“Although we are not at this time showing the Charlie Hebdo cartoons of the Prophet considered offensive by many Muslims, platforms are encouraged to verbally describe the cartoons in detail. This is key to understanding the nature of the attack on the magazine and the tension between free expression and respect for religion," Griffiths wrote in the e-mail obtained by Politico.

The AP explained why it opted not to include Muhammad cartoons in the images it distributes, including photos of Charlie Hebdo editor and publisher Stéphane "Charb" Charbonnier holding an issue of the magazine. He was among the 12 killed in the Paris attack. 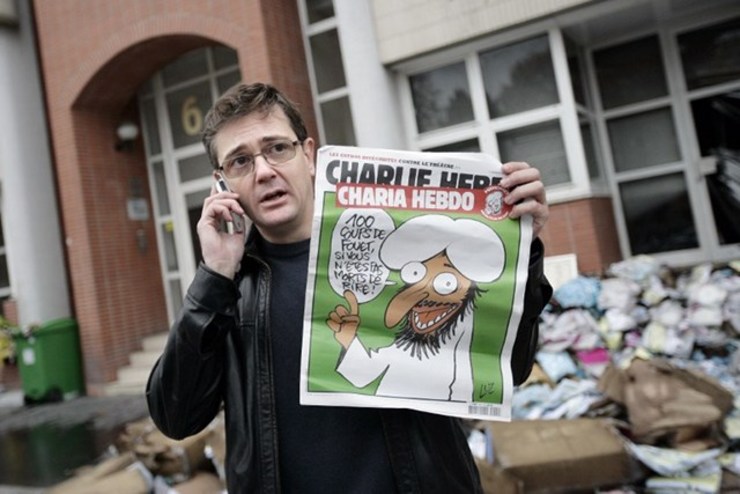 CONTROVERSIAL PHOTO. Some news organizations decided to blur the magazine cover in this photo. Charlie Hebdo's slain publisher known as Charb, uses his cell phone as he shows a special edition of French satirical magazine on November 2, 2011 in Paris.

The cover features a cartoon of a grinning, bearded figure, saying: u2018100 lashes if you don't die of laughter!u2019 File photo by Alexander Klein/AFP

The venerable New York Times also believes that describing the cartoons are enough for readers to understand the story. “Under Times standards, we do not normally publish images or other material deliberately intended to offend religious sensibilities.”

The NBC News Group said it sent guidance to its team not to show headlines or cartoons that could be viewed as “insensitive or offensive.”

The Jewish Chronicle in the UK cited safety as the special priority for its staff.

Get real, folks. A Jewish newspaper like mine that published such cartoons would be at the front of the queue for Islamists to murder. — Stephen Pollard (@stephenpollard) January 7, 2015

Just to provide some extra context - we are already targets and have had to have armed police protection relatively regularly. — Stephen Pollard (@stephenpollard) January 7, 2015

Still, other newsrooms made a different editorial judgment.

Bloomberg, The Huffington Post, and The Daily Beast published slideshows of the cartoons, with one gallery headlined, “16 Most Shocking Hebdo Covers.”

I just find this stance to be utterly bizarre when the images in question are at the core of a news story https://t.co/ufoRYfww0U — Joseph Weisenthal (@TheStalwart) January 7, 2015

Unlike AP, Agence France-Presse (AFP) is not altering photos of the cartoons.

[Fixes typos] If your paper uses an AFP pic of Charlie Hebdo and it's pixelated that's their choice. Our wire: pic.twitter.com/7N4VD8rr27 — Dave Clark (@DaveClark_AFP) January 7, 2015

Vox chose to make an explainer, this time using images complete with English translations of the French cartoon covers. It called the piece, “Charlie Hebdo and its biting satire, explained in 9 of its most iconic covers.”

‘You let the terrorists win’

Media watchdogs and advocacy groups all condemned the attack but the Paris-based Reporters Without Borders went a step farther by issuing an “international appeal to media editors” to publish the magazine’s iconoclastic cartoons.

“Freedom of information cannot shrink in the face of barbarity and yield to blackmail by those who assail out democracy and what our republic stands for. In the name of all those who have fallen in the defence of fundamental values, let us continue Charlie Hebdo’s fight for free information,” the organization said.

American journalism professor and media pundit Jeff Jarvis issued a stinging critique of US media on his Twitter feed.

Mashable noted that American media outlets tend to show more restraint in publishing images of the Prophet Muhammad than their European counterparts.

Are you mice or are you journalists? MT @ErikWemple : Fox News: "No plans" to air images of Charlie Hebdo cartoons: http://t.co/Yzpw28AhMf — Jeff Jarvis (@jeffjarvis) January 7, 2015

American editors & producers: This is what you will be judged against RT @nycjim : Powerful: “They died for it!” pic.twitter.com/iWMwmVdaFf — Jeff Jarvis (@jeffjarvis) January 7, 2015

While Fox said it will no longer air images of the cartoons, its own contributor blasted other news groups like the New York Daily News, which blurred the photos.

“I think that is appalling,” said Fox contributor Stephen F. Hayes. “If ever there were a time to show these cartoons, it’s now. And I don’t think it’s an exaggeration to say that by choosing not to do that, you are in effect letting the terrorists win.”

Media writer and anthropologist Sarah Kendzior though pointed out that there are limits to free speech.

Free speech means not only the right to offend, but the right to defend. Free speech does not mean deferring to people's desire to abuse. — Sarah Kendzior (@sarahkendzior) January 8, 2015

The cartoons were bigoted. The murders are horrific and inexcusable. Those are not mutually exclusive. @jakewearspants — Sarah Kendzior (@sarahkendzior) January 7, 2015

‘Satire does not kill’

With the heated debate, journalists, their critics, and their audience were unanimous on one point: there is no justification for shooting dead even the most irreverent and infamous cartoonists and editors.

The Times dedicated its editorial to the massacre: “There are some who will say that Charlie Hebdo tempted the ire of Islamists one too many times, as if coldblooded murder is the price to pay for putting out a magazine. The massacre was motivated by hate. It is absurd to suggest that the way to avoid terrorist attacks is to let the terrorists dictate standards in a democracy.”

City University London journalism professor Roy Greenslade wrote in The Guardian that journalists must honor the murdered staff by refusing to self-censor.