MANILA, Philippines (UPDATED) – It is easy to get confused with all the terms and concepts in the United States presidential elections. Delegates, superdelegates, electoral college, primaries: these are just some of the technicalities that will come up in discussions as the 2016 US presidential election unfolds.

In the Philippines, the election period formally starts in early January, on a date set by the Commission on Elections (Comelec). Prior to this, however, are the filings of candidacy, party meetings, and eventual party nominations that would determine the final roster of presidential candidates. By early February, the campaign period officially starts.

The US presidential elections, meanwhile, consist of two distinct phases whose rules and dynamics are not so straightforward. There is the primary period, when each political party’s presidential candidate is determined. Then there is the general election period, when the eventual president of the United States is elected.

Two major parties dominate the US political sphere: the Democratic and Republican parties. There are minor parties, such as the Libertarian and Green parties, but these have yet to gain the same sizeable influence as the dominant parties.

Party politics and loyalty greatly influence elections in the US for reasons dating back to the Founding Fathers and the Civil War.

Here, let us look at the basic principles governing the US presidential elections and perhaps chart its differences with the elections we have here in the Philippines.

The US follows a two-party system. This means that, although more than two parties can campaign and hold office, two political groups, the Democrats and the Republicans, hold majority of the power. Of the 43 US presidents that have served, 15 were Democrats and 18 were Republicans.

Who are the Democrats and Republicans? 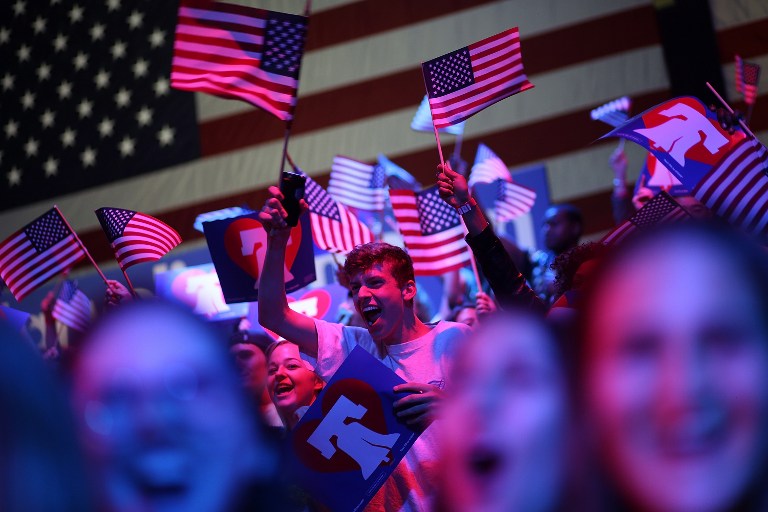 The Democratic Party was founded in 1828, nearly 190 years ago. Members of this party are also known as liberals or progressives because of their association with libertarian values, like freedom of choice and self-determination, social justice, and social liberalism.

This party usually focuses on providing social services, healthcare, and jobs, and so it tends to borrow large sums of money and rely heavily on taxes. The current Democratic candidate is Hillary Clinton.

The Republicans, on the other hand, are a relatively younger party, founded in 1854 by anti-slavery activists. They are known as conservatives because of their preference for conservatism, promoting individual rights and limited government. This party is also known for being corporatist, endorsing economic liberalism, less government spending, and lower taxes. The current Republican candidate is Donald Trump.

What are the other parties? 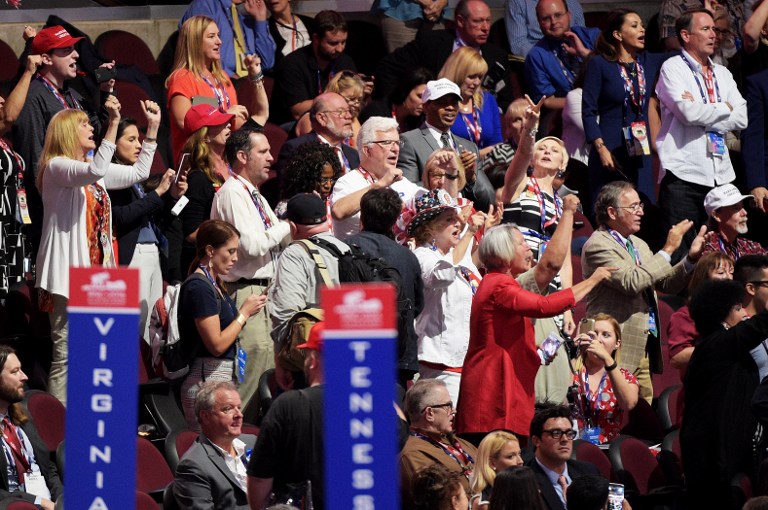 PARTY CONVENTION. Delegates protest on the floor during on the first day of the Republican National Convention on July 18, 2016 at the Quicken Loans Arena in Cleveland, Ohio.

Aside from the two major parties, there are lesser-known third parties, the more notable of which include the Progressive Party, the Libertarian Party, and the Green Party.

These third parties have a much harder time winning offices in government simply because they are so much smaller in both size and power. In the history of the US, no third party candidate has ever won the presidential election. In fact, third party candidates usually have to get thousands of signatures just to be on the ballots.

The way the US election process is structured perpetuates the two-party system. Like in the Philippines, candidates in the US win by gaining a plurality – more votes than any of their competitors – rather than a majority. This makes it a lot easier for the two large parties to secure votes, since each one already has a long-established following.

Additionally, the winner-take-all system of US elections means that there are no positions offered to candidates that finish second. This means that smaller parties never get the opportunity to build a large following for themselves in the legislature.

What are caucuses and primaries? 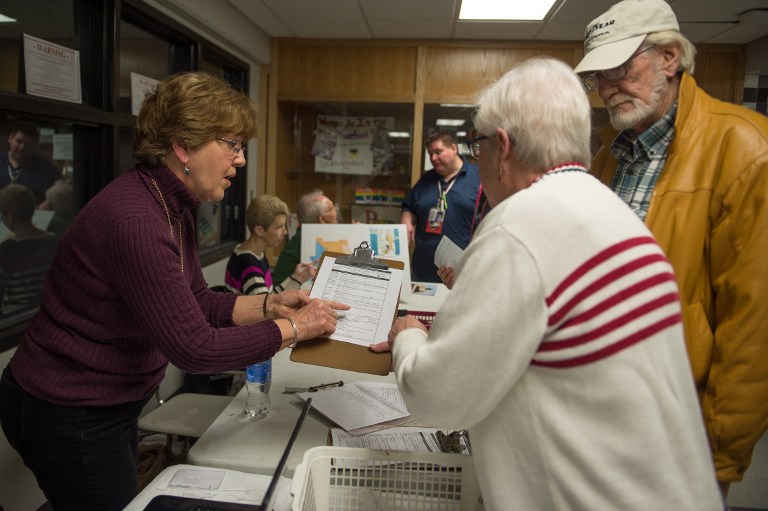 Caucus workers check in voters prior to the Republican Party caucus at Keokuk High School on February 1, 2016 in Keokuk, Iowa. Michael B.

Caucuses, which usually happen in smaller states like Iowa, are party meetings in which attendees publicly vote by grouping themselves according to their preferred candidate. In primaries, which happen in bigger states like California, citizens cast their votes by secret ballot.

No one rule prescribes the method each state should follow. Even in a single state, different precincts could use different methods. It all depends on state or party laws.

For example, one distinct state law in Iowa is that no other state may hold caucuses or primaries before it does. This is why the first caucus always happens in Iowa.

There are also states that hold closed primaries, which are only open to those who are registered either as Democrats or Republicans. Such regulation is one of the reasons why these two parties continue to have great influence in US politics to this day.

What happens when a candidate wins a caucus or a primary?

To win a caucus or primary is no typical plurality win. What the candidates vying for party nomination actually get are pledged delegates, party members either chosen or elected at the local or state levels. These delegates vote on behalf of their constituencies during national conventions, which we will get to later on.

The Democratic party has so-called superdelegates who, unlike pledged delegates, vote based on party interests and not constituencies. 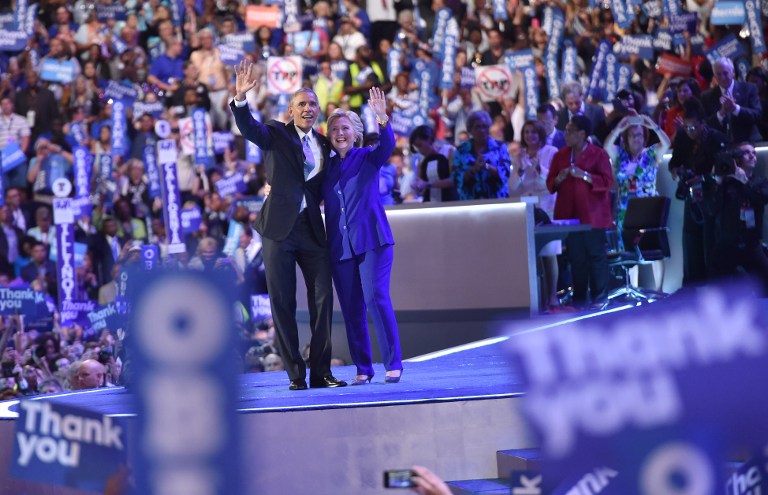 US President Barack Obama (L) waves with US Presidential nominee Hillary Clinton during the third night of the Democratic National Convention at the Wells Fargo Center in Philadelphia, Pennsylvania, July 27, 2016.

Because they have different party rules and traditions, the Democratic and Republican parties do not have the same number of delegates. There are 4,763 Democratic delegates, with at least 2,807 needed to be assured of party nomination.

On the other hand, there are 2,472 Republican delegates, and a candidate needs at least 1,237 to get the party nomination. The number of delegates a candidate gets is proportional to the number of votes he or she gets in caucuses and primaries. The parties have their respective formulas for computing these.

For this election cycle, the magic numbers were won by Hillary Clinton and Donald Trump, respectively.

What becomes of the other candidates from each party?

Caucuses and primaries, as well as debates and other party gatherings, all happen in a span of approximately 5 months. In this amount of time, some candidates may express withdrawal from the race. The turnouts at the first caucuses and primaries are valuable in assessing whether a candidate even has a chance at getting the party nomination. By the time national conventions approach, often only two candidates for each party are left vying for delegates.

The primary season culminates in party conventions, in which the national parties assemble to formally declare their nominees and ratify their platforms. Conventions are considered as mere formalities because the likely party candidate is often determined after the last caucuses or primaries, once the number of delegates won has been totaled.

When is election day?

Once the party candidates have been declared, their official platforms will have to be ratified. Candidates will have to choose their running mates. From early August until late October, they go from state to state to win voters over.

Election day is always on a Tuesday— to be specific, the first Tuesday of November. This is due to a tradition that dates back to the late 18th century. Much like during primaries, Americans cast their votes at polling booths. Although they indicate their desired president-vice president ticket, they are actually voting for who will vote on their behalf in the electoral college.

In the primaries, a party’s delegates in a particular state are distributed proportionally among candidates; during the November polls, the candidate who gets the majority of votes – more than 50%, that is – gets the entire elector allocation for that given state.

Electoral votes are cast by so-called electors a month later, in December, in their respective state capitals. These electors – 538 in total – comprise the electoral college. A candidate needs at least 270 electoral votes to clinch the presidency.

Electors are expected to vote according to the turnout of the November polls in their state. There is no law that compels them to do so, however. There have been very few cases in the past where electors voted differently from their constituents.

The person who clinches 270 electoral votes will then become the next President of the United States. – Janelle Paris and Paco Tantoco/Rappler.com

* Note: There are two senators per US state. Meanwhile, the number of congressmen depends on the number of districts in a state, which in turn is determined by population.